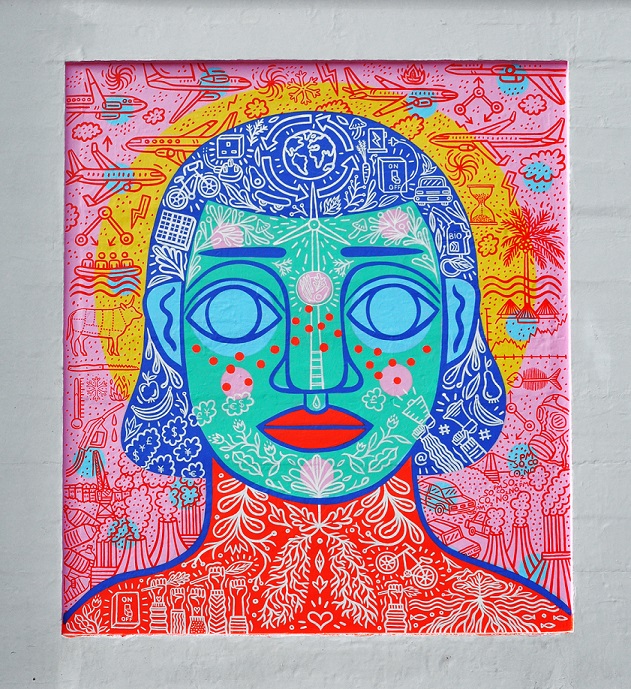 As climate change is an ever present and urgent issue, We The Curious is committed to promoting ideas and conversations about sustainable futures. In collaboration with the University of Bristol’s Cabot Institute, we commissioned Bristol artist Anna Higgie to create a mural about climate change at the entrance to our building. In working with Anna, we wanted to create an attractive and thought-provoking piece that explores the causes, consequences and solutions to climate change, and its impact on cities. Anna worked with Cabot Institute scientists, such as Erik Mackie who studies the link between oceans and climate, to learn more about their interdisciplinary research into climate change. The mural was painted in October 2018 during Green Great Britain Week and was supported by the Department for Business, Energy & Industrial Strategy.

We caught up with artist Anna Higgie (@annahiggie), to find out a little bit more about the project:

What was your brief, and how did you go about your design?
The brief was to create a mural about the future of cities during climate change. After spending some time sketching and pondering the brief, I decided that the main element of the composition should be a human face. There is something instantly appealing about the image of a face; it attracts people’s attention. I wanted the image to have a bold strong design, to draw people towards it from far away, and to contain loads of interesting and thought-provoking detail to explore when they got close up to it.

You worked with some scientists from the Cabot Institute for the project - what sort of input did you have from them?
The meeting that I had with the scientist from the Cabot Institute was really interesting and eye-opening. I knew bits and bobs about climate change, but mostly just from what I’d heard and read in the media - so it was great to talk directly with a scientist who is currently working on climate science. He explained exactly why the goal of this new Intergovernmental Panel on Climate Change (IPCC) report is to prevent the average temperature from reaching 2° C above pre-industrial levels. I didn’t really know about this goal before, and to be honest it is really scary to think about what will happen if the temperature does increase more than 2° C. He also explained a lot about sea level rise and the complexities of that. We talked about the fact that a lot of the catastrophic effects of climate change will mostly affect the poorest people in the world and that mass displacement and migration and, potentially, conflicts will most likely be the consequences, if things don’t change soon.

What were the challenges of this project? How did you manage to take a big complex issue such as climate change and bring it together into one art piece?
I think the thing that concerned me the most was avoiding making the image depressing or too gloomy and scary, as that would potentially turn people off. I wanted it to have a provocative aspect but be hopeful and positive, offering solutions and inspiration for people to make a change for the better. I also wanted to use a bright beautiful palette of colours in order to brighten the space and feel joyful and fun. 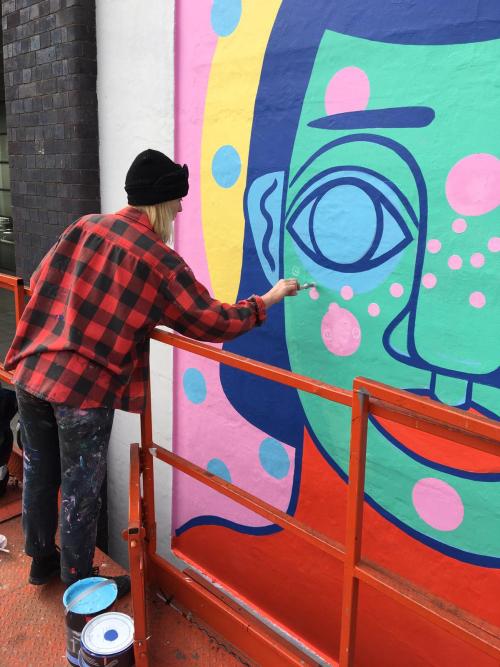 What would you like people to take from seeing the mural?
I would like people to look at it and ask questions; I would like it to provoke conversation. The main thing I would like is that people might take ideas from it about what they can do - as individuals and as communities - to make a change. Small changes may seem insignificant when you think about the global problems we face, but if everyone started making small, positive changes to their lifestyle, such as driving less, or eating less red meat, it could lead to a huge change for the better. At the very least, if people started living more sustainably then at least our home here in Bristol would be less polluted and would be a cleaner, healthier place for us to live.

What worries you about the future, and what gives you hope for the future?
What worries me about the future is that, with the way that politics is at the moment, climate change just does not seem to be a priority. The governments of the world right now all seem to be tackling a lot of other problems, (that aren’t necessarily unimportant), but climate change is such a complex, hard to grasp issue, it risks getting forgotten. I also think that big businesses have so much power and some seem unwilling to change and tackle our global addiction to fossil fuels; they’re in a really powerful position to make a change for the future.

What gives me hope is living in Bristol and being surrounded by people that really do care about climate change. I think that, if we keep spreading the message, change is possible.

What we do at We The Curious

We The Curious commissioned this artwork as part of our mission to promote sustainable futures for all. We recognise the threats that climate change poses to our society, our species and our planet, and we are rising to meet the challenge. We work to engage the public with these issues, and with local and global partners to create positive change. Most importantly, we are committed to reducing our own environmental impact. As the main driver of climate change is carbon dioxide (CO2) we are striving to reduce emissions in our daily operation, and support others to do the same.

How We The Curious reduces CO2 emissions:

We The Curious declares a climate emergency

On the 5 June 2019, we declared a climate emergency; by publicising our pledge to be carbon neutral by 2030.

Along with Bristol City Council and the University of Bristol, we’re one of the first organisations in the city to make this public declaration, which aligns with Bristol’s ambition to become carbon neutral by 2030.

We’re the first science centre in the world to declare a climate emergency; the aim of the declaration is to inspire both organisations and individuals to take action.

If you’d like to know a bit more about what it all means, and both what we’ve done and plan to do to reach our carbon-neutral by 2030 target, then just click here. 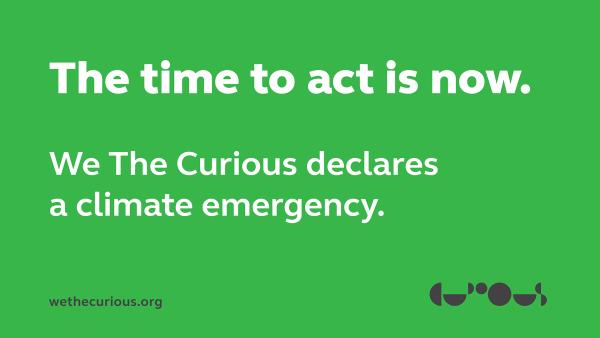 What you can do to reduce CO2 emissions:

If you are interested in supporting our mission to promote sustainable futures then please contact Jane Ibbunson - jane.ibbunson@wethecurious.org 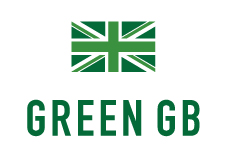