Read | Saturn - the true monarch of the planets

Saturn is a gas giant, made of mostly hydrogen and helium. It’s big enough to fit about 800 Earths inside. Despite its awesome size it’s dwarfed by another gas giant in our Solar System.

Jupiter has often been called the"Monarch of the Planets". It’s big enough to fit roughly 1300 Earths. In size at least, Saturn must make do with second place.

There are however, other areas where Saturn has Jupiter beat. Of all the planets, save perhaps for our home planet Earth, Saturn is the most famous and memorable. Ask any child to name their favourite planet and they’ll most likely say Saturn.

Saturn has become a symbol for astronomy and space exploration. The rocket that launched the first astronauts to walk on the Moon into space was called Saturn V.

Digistar 6 — the software used in our very own Planetarium at We the Curious — features the silhouette of a Saturn-like planet in its logo.

Perhaps the title of “monarch” truly belongs to the second biggest planet in the Solar System? But what is it about Saturn that has made it so iconic? 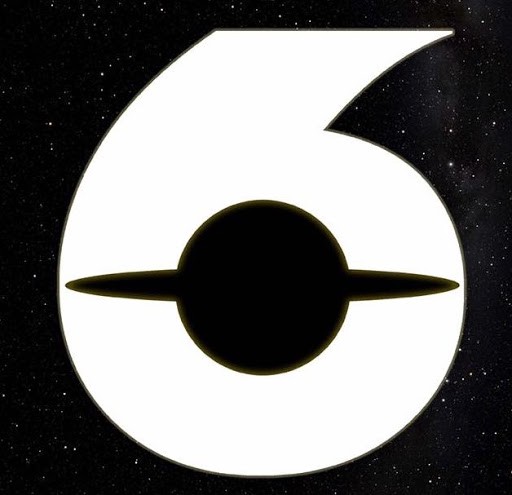 The logo for Evans & Sutherland's Digistar 6

Can I see the rings of Saturn?

Saturn is probably most famous for its magnificent rings. It’s not the only planet in our Solar System with rings — Jupiter, Uranus, and Neptune have them too. But Saturn’s rings are the biggest and easiest to see.

The rings were first seen by Galileo Galilei in 1610, although his telescope wasn’t good enough to make out the details. To him they looked like bulges either side of Saturn. He called them Saturn's "ears".

You can see these “ears” today with a small telescope, but unlike in Galileo’s day there are also larger telescopes available that can make out more detail.

What are the rings of Saturn made of?

The rings are made from trillions of pieces. These pieces are mostly ice, with some rock and dust too. Some of the pieces are as small as a grain of sand while other pieces are as big as a house.

The rings most probably formed when a moon was destroyed after getting too close to Saturn, but we don’t know for sure.

How big are the rings of Saturn?

Saturn has seven main rings, with gaps in between them. One of these gaps is called the Cassini Division. This 4,800 km wide gap is not empty space but is in fact an area that’s less densely filled with ring material. It’s been caused by the gravity of Mimas, one of Saturn’s moons.

There is also a 325-km-wide gap called the Encke Gap. It’s also been caused by one of Saturn’s moons. This moon — Pan — is actually inside the Encke Gap, clearing the area of ring particles. For this reason, Pan is known as a “shepherd moon”. 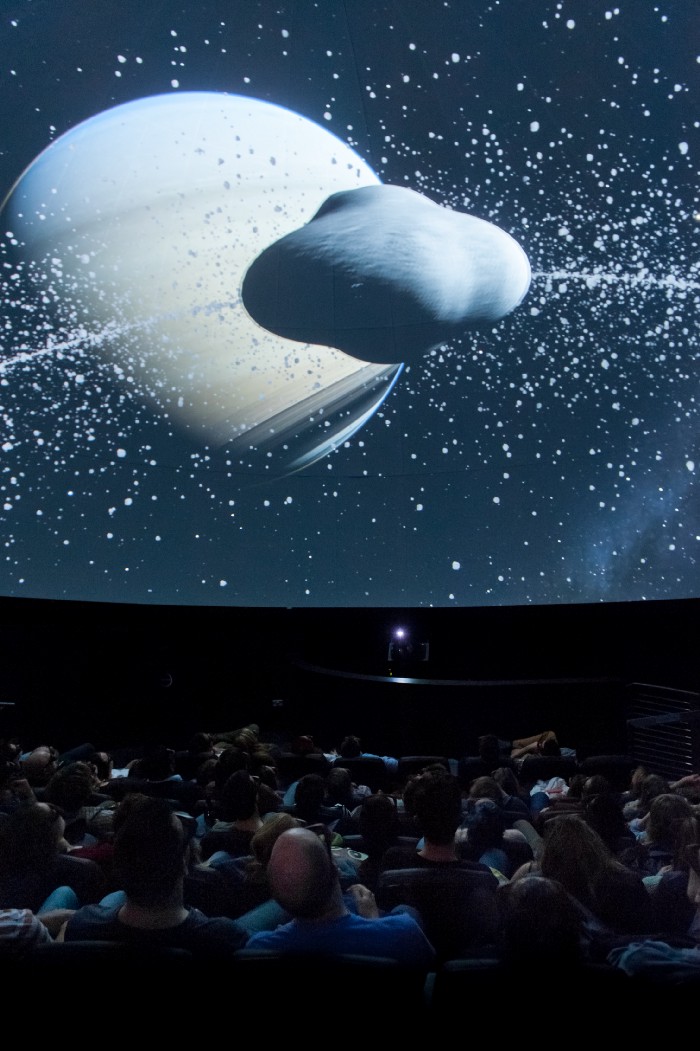 If Saturn was the size of the We the Curious Planetarium then the rings would be only a tenth as thick as one sheet of A4 paper. This is something I can say with some authority, as I was once given the job of working out the maths by my manager.

Why do Saturn’s rings stay around the middle?

Saturn’s rings are on the equatorial plane — they go around it’s middle. This is because Saturn isn’t a perfect sphere, it bulges a bit in the middle.

This means that any ring particles that aren’t going around the middle don’t have a circular orbit. They travel along an elliptical path as they go around the planet and so they often collide with each other.

The particles going around the middle in a circular orbit don’t collide as much. As a result, over time, the particles orbiting Saturn end up on the same plane. 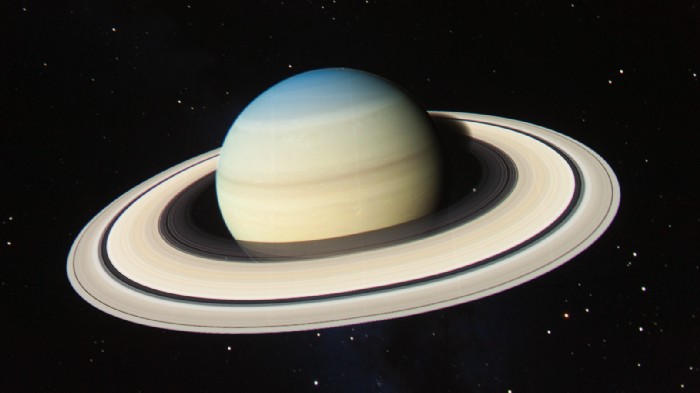 The moons of Saturn

That year however, 20 additional moons were discovered orbiting Saturn. Saturn now holds the record for most moons in the Solar System — with 82 known moons.

Why do some of Saturn’s moons travel in different directions?

Some of Saturn’s moons are regular moons that formed in orbit around the planet. These are the moons that are most likely to be all on the same plane and going around in the same direction as the planet is turning.

Some of Saturn’s moons are irregular moons that have been captured by Saturn’s gravity. These are more likely to be orbiting on different planes.

How do we know so much about Saturn?

In 1997 the Cassini-Huygens mission was launched. It was a collaboration between NASA, the European Space Agency, and the Italian Space Agency. Cassini was an orbital space probe while Huygens was a lander attached to it.

Cassini took seven years to get to Saturn and spent the following 13 years exploring the ringed planet. It taught us more about the forces that shaped the development of our Solar System as well as more about the kinds of worlds where life might exist. It let us see weather on another planet and sent some amazing images back to Earth. 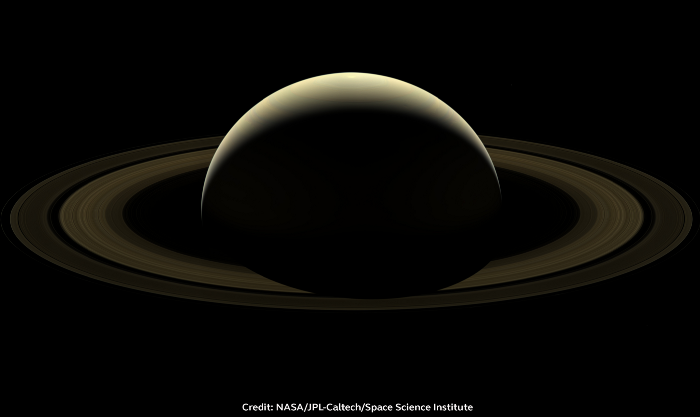 In 2005 Huygens was sent down to the surface of Titan and became the first human made object to land on a world in the distant outer Solar System.

Huygens sent back images from the surface and revealed a world that’s similar to Earth in some ways, and very different in others. Like Earth, Titan has weather, dunes, and rivers. But Titan is much colder than Earth and the atmosphere is mostly nitrogen and methane rather than nitrogen and oxygen.

There is some water on Titan but it’s underneath a thick crust of ice and the rivers and seas on the surface are liquid methane and ethane. These rivers and seas could be lifeless, or they could be home to forms of life that are very different to what we’re familiar with on Earth.

Life could potentially evolve on Titan billions of years from now. By then the Sun will have grown bigger and become a red giant and Titan will get warmer and be hit with fewer ultraviolet rays.

But will there be any humans around to see it by then? 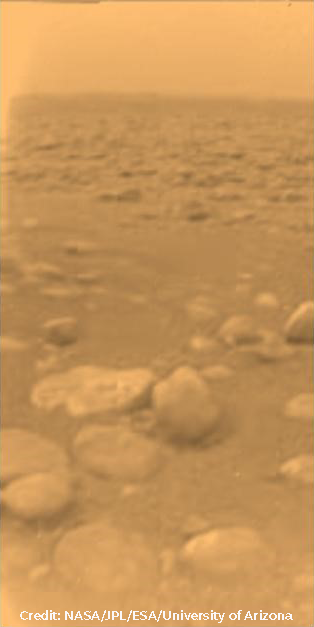 The surface of Titan

Enceladus is another of Saturn’s more interesting moons. It’s Saturn’s sixth largest moon and is only a tenth of the size of Titan. In 2005 Cassini flew past Enceladus multiple times and discovered plumes of water shooting out of cracks in the ice around the planet’s south pole.

These were geysers and over 100 of them have been found. In 2014 Cassini found evidence of a large ocean of liquid water under the ice in the south pole. Chemicals in similar geysers found in Earth’s oceans are able to support tiny forms of life — microorganisms. It’s possible that there could be similar forms of alien life on Enceladus. 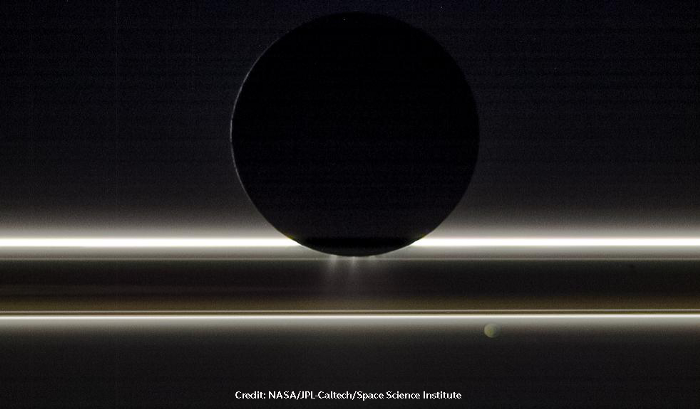 Enceladus in front of the rings, with plumes visible and the moon Pandora in the background

What happened to Cassini?

Unfortunately, Cassini is no longer around. By 2017 Cassini had run out of fuel. To protect any moons that might have the potential for life Cassini was sent into the atmosphere of Saturn where it burnt up. It continued sending back information to Earth until the very end.

When we consider Saturn in detail, can Jupiter truly lay claim to the title of “Monarch of the Planets”? Jupiter may be bigger, but Saturn is more famous and has bigger rings. Saturn has many moons, each a fascinating world in its own right. Jupiter also has many interesting moons, but Saturn has more of them!

If you’d like to find out a bit more about the ringed planet then take a look at the video below. It was originally live streamed on Facebook, and I use the free Planetarium software, Stellarium (download it here!) to look for Saturn.