Jupiter - more than a giant

Ask anyone to name the biggest planet in our Solar System and chances are most people would be able to name Jupiter. Jupiter is indeed, very big. More than 1300 planet Earths would fit into this gas giant.

But Jupiter has a lot more going for it than just being really, really big. The king of planets is a mysterious world of turbulent storms that’s surrounded by rings, moons, and even LEGO (yes, LEGO!).

But let’s not understate just how big Jupiter is. It’s around 140,000 kilometres in diameter. That’s even bigger than the smallest star. Jupiter’s not just big — it’s massive. Mass is the amount of matter that makes up an object, and Jupiter is an object with a lot of mass. It has 2.5 times the mass of all the other planets combined.

The Moons of Jupiter

Jupiter may be king of the planets when it comes to size and mass, but it recently lost its crown as king of the moons. Jupiter has 79 known moons. This was the most moons of all the planets in the Solar System until 2019 when 20 extra moons were found going around Saturn. Saturn now has 82 known moons and so, for now at least, has more than Jupiter. 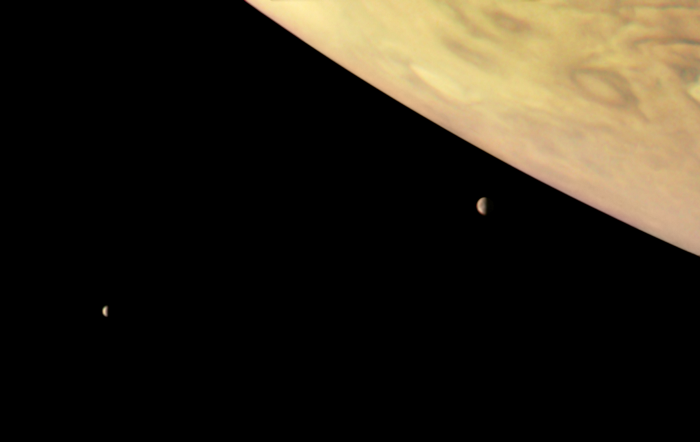 Jupiter may not have the most moons anymore, but the moons it does have are fascinating places. It’s four largest moons — Io, Europa, Ganymede, and Callisto — can be seen from Earth with a pair of binoculars. They look like little pin pricks of light near Jupiter. They’re called the Galilean moons, because they were discovered by Galileo Galilei around December 1609 or January 1610.

Ganymede is Jupiter’s biggest moon. It’s also the largest object in our Solar System that isn’t a planet or the Sun. It’s 8% larger than the planet Mercury and has a metallic core, making it the only moon known to have a magnetic field. 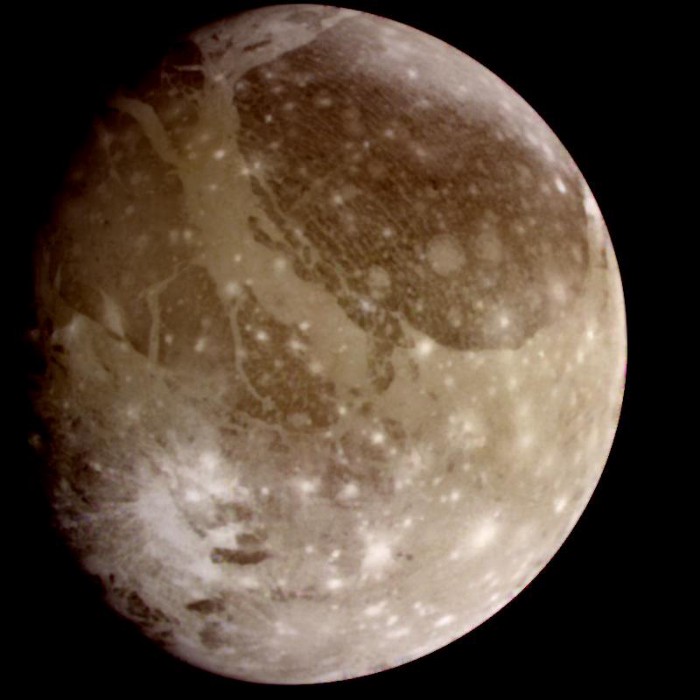 A picture of Ganymede from the Galileo spacecraft.

The smallest of the Galilean moons, Europa could be home to alien life! It’s covered in a layer of ice that’s around 20km thick. Underneath the ice there’s a liquid water ocean.

Based on what we know of Earth, life needs water to survive. Plumes of liquid water have been observed by the Hubble space telescope blasting out from the surface into space. In fact, on Earth tiny, simple forms of life feed on chemicals found in hydrothermal vents — hot gas coming from cracks in the ocean floor. This could be happening on Europa too!

Scientists think there could be a salty, liquid water ocean under the surface of Ganymede too. Despite this Ganymede is much less likely to be home to tiny aliens. It’s believed that the pressure at the bottom of Ganymede’s ocean is so high that any water down there would turn to ice. This would mean that unlike on Europa, it would be very difficult for hydrothermal vents to bring chemicals that could feed potential life to the ocean.

We may learn a lot more about Ganymede and Europa very soon. The European Space Agency are planning to send a probe to explore them in 2022 — The JUpiter ICy moons Explorer , or JUICE for short.

JUICE will fly past Ganymede in 2029, Callisto in 2030, and Europa in 2031. Then in 2032 it will put itself in orbit around Ganymede, becoming the first spacecraft to orbit a moon other than Earth’s. 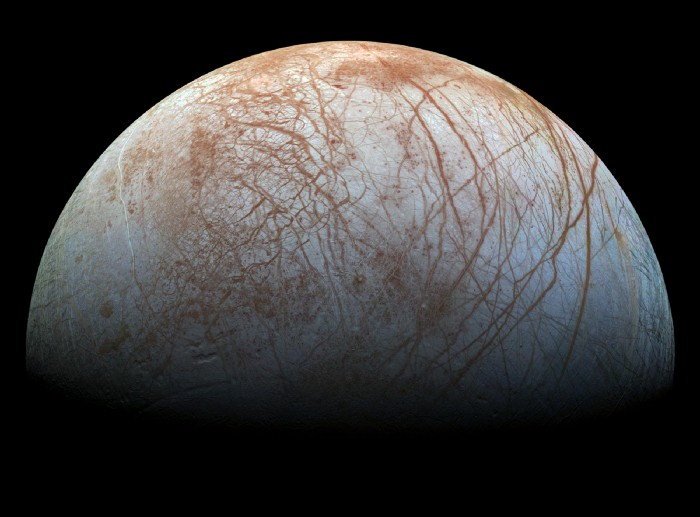 A picture of Europa from the Galileo spacecraft.

NASA are also planning to investigate Europa further when they launch a probe called Europa Clipper in 2024. Europa Clipper will orbit Jupiter, but fly past Europa 44 times to take an even closer look at its ocean.

What about a mission with astronauts? What would it be like to set foot on Europa and look for evidence of microbial life in person? One day it may happen, but Europa would not be a very comfortable place for humans.

Even though the centre of the moon is hot, up on the surface it’s freezing cold. Temperatures are as low as -220 degrees Celsius — that’s over a hundred degrees colder than the coldest temperature ever recorded on Earth!

Astronauts on Europa would have to protect themselves from the deadly radiation coming from Jupiter and avoid plumes of water shooting suddenly from the ice into space.

The gravity on Europa is only about 13% of the gravity of Earth. This means that there’s almost no atmosphere and no air to breathe. It also means astronauts would have to jump around when travelling on foot, much like astronauts had to on Earth’s Moon. 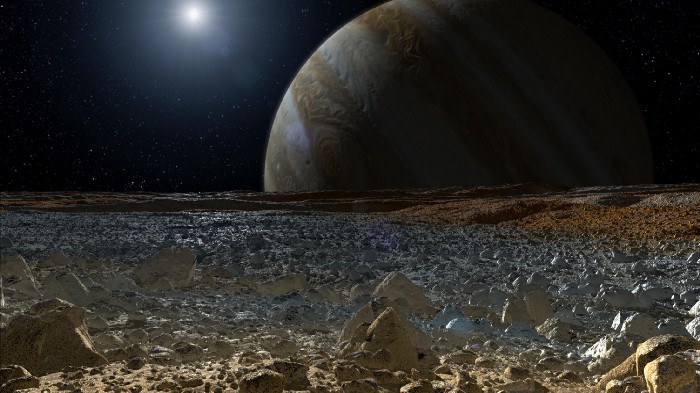 Artist’s interpretation of the view from the surface of Europa.

The Rings of Jupiter and the Great Red Spot

Astronauts on Europa might be close enough to get a glimpse of some of Jupiter’s less famous features — its rings.

Jupier's four rings are difficult to study as you have to be very close to see them. They’ve been spotted by probes that have flown past Jupiter, like Voyager 1, and by the Hubble Space telescope that orbits Earth. But to see the rings from the surface of Earth you need the largest available telescopes.

The rings were likely to have been created by dust kicked up by chunks of rock and ice smashing into some of the moons of Jupiter but we don’t know for sure.

Jupiter’s Great Red Spot is much more famous than its rings. The Great Red Spot makes Jupiter look like it has a huge orangey red eye gazing out into space.

It’s actually a storm that’s about twice the size of planet Earth. Jupiter is a very stormy planet. It’s a gas giant so there’s no land to break up the wind. Windspeeds can reach up to 650km per hour— more than twice as fast as the most powerful hurricanes on Earth. 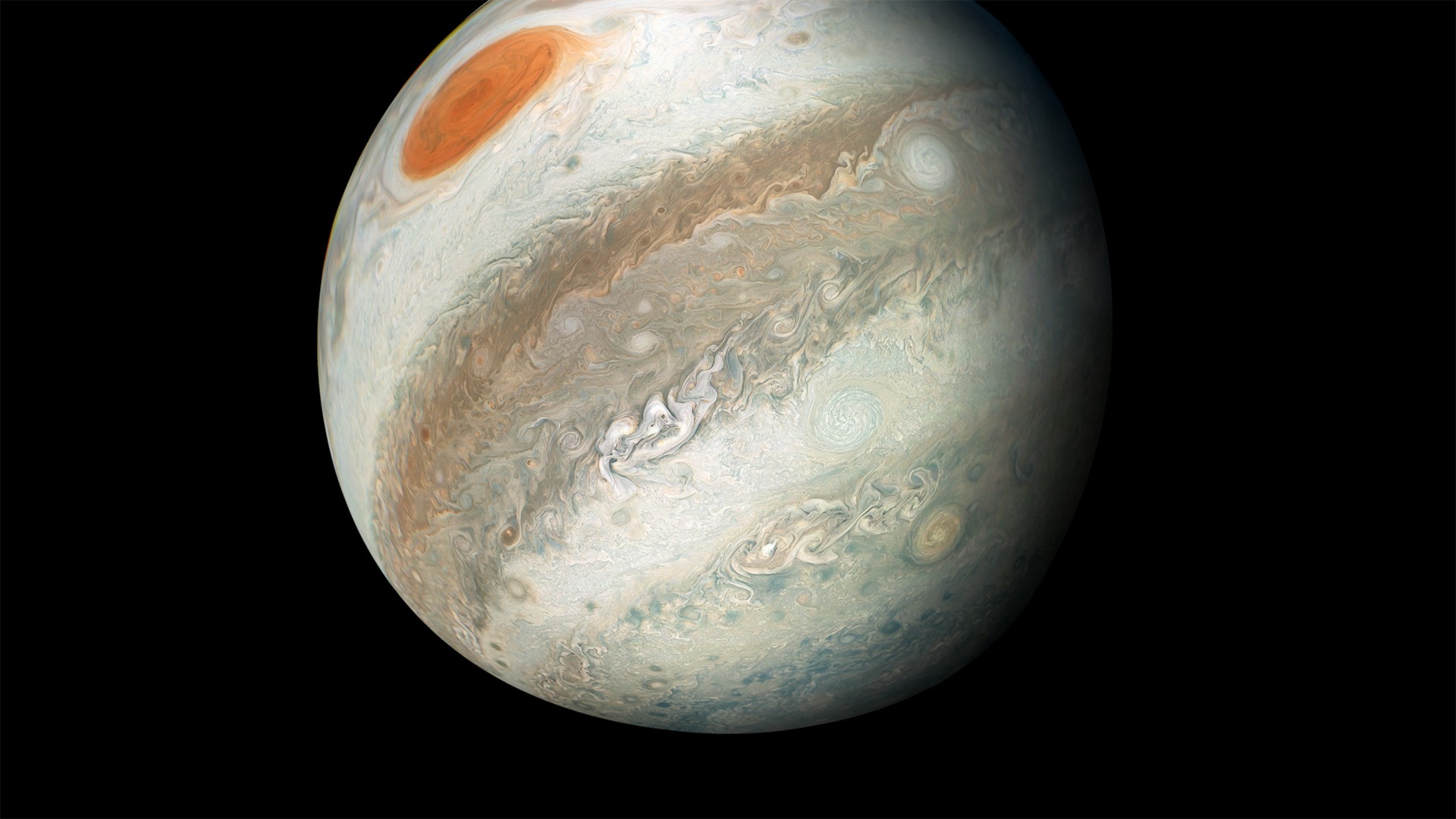 A view of Jupiter’s Great Red Spot from the Juno spacecraft.

Since 2016 a NASA space probe called Juno has taught us a lot about Jupiter. The probe has a lot of scientific instruments on board and even a colour camera called JunoCam that’s sent back some amazing pictures. 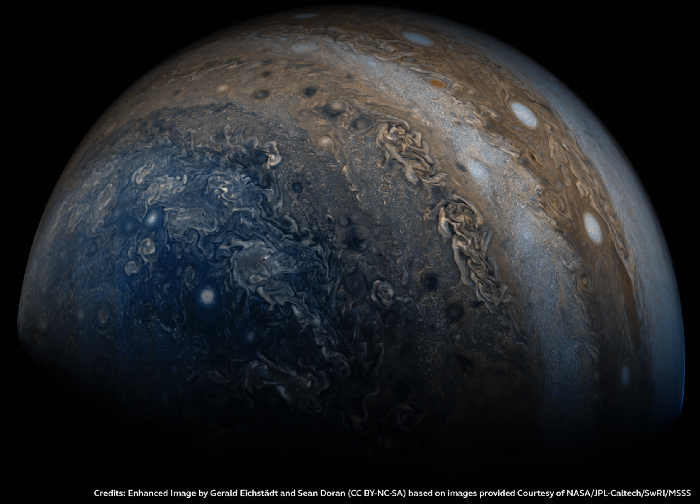 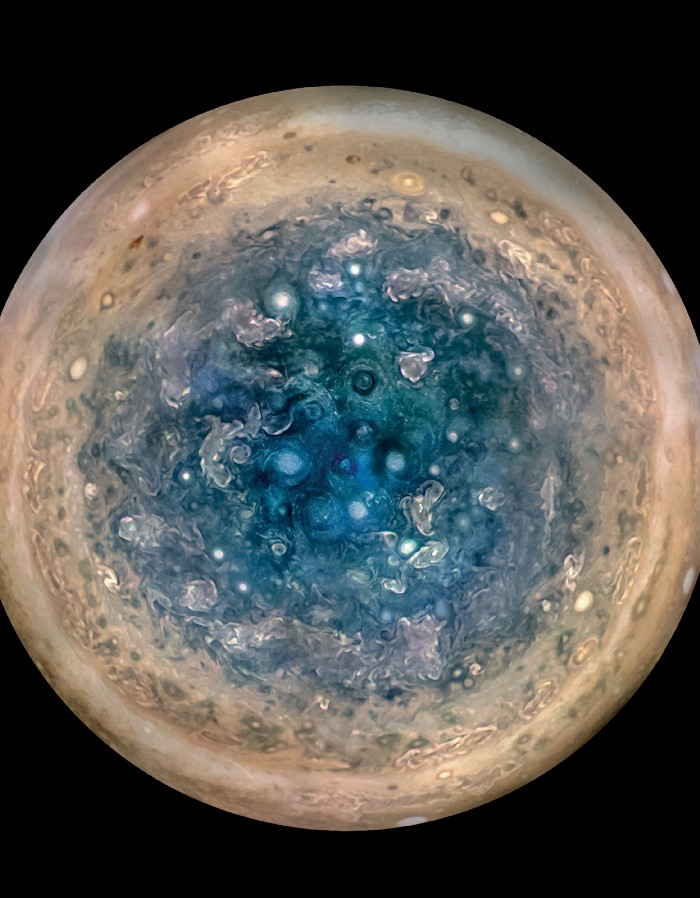 As beautiful as it’s photos are, possibly the most amazing thing about Juno are it’s passengers. Aboard Juno are three LEGO figures! 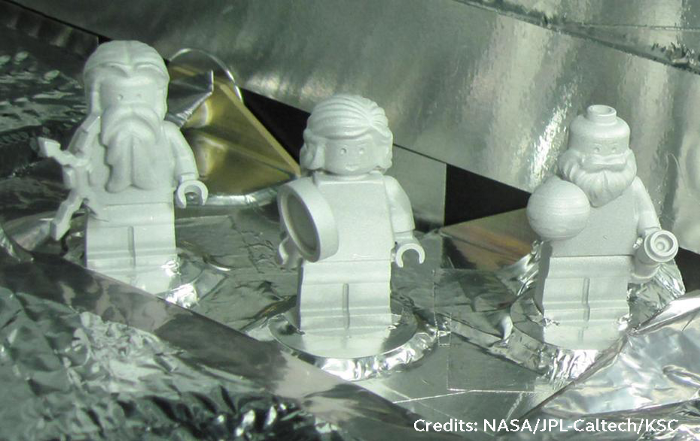 Jupiter is an amazing planet, and it’s often possible to see it from Earth. It’s usually the fourth brightest object in the sky after the Sun, the Moon and Venus, although sometimes Mars is brighter.

Whenever I looked at it in the past I would think about it’s size. But these days I realise it’s much more than just a giant. It’s an incredibly beautiful planet that’s orbited by a moon that may be home to alien life, and a probe that contains three LEGO figures that have traveled further than any human.

Or at least further than any human has traveled yet.

If you’d like to find out a bit more about the king of planets then take a look at the video below. It was originally live streamed on Facebook, and I use the free Planetarium software, Stellarium (download it here!) to look for Jupiter. If you’re curious about how Jupiter has inspired people over the years then follow this link to check out our article about Holst's Planets and astrology. 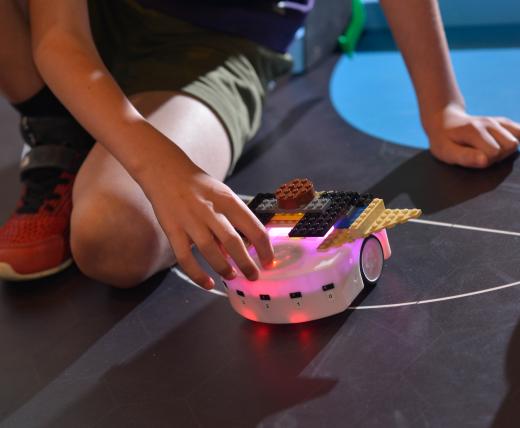 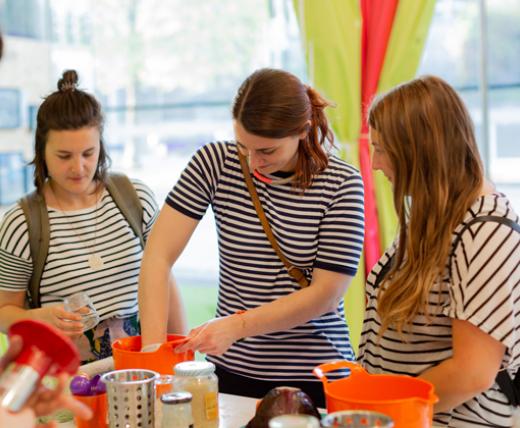