A few weeks ago, we went and visited our friends at the Prince's Trust Centre in Bristol, as we wanted to talk to a group of 16-24 year olds to find out what they think of At-Bristol, and what curious questions they may have!

Here's an account by one of our visitors, Melanie Chapman. An English Language graduate, Melanie is 24 years old - originally from Bristol, she went to university in Central Lancashire, and moved back to Bristol recently.

By Melanie Chapman, Visitor to At-Bristol

Last week At-Bristol made a trip to the Prince’s Trust Centre to talk to some of the young people on the Fairbridge programme, myself included. They wanted to get opinions from 16-24 year olds about the At-Bristol Science Centre and to ask what they were interested in; everyone had to write down a question that they wanted an answer to, which led to some interesting discussions.

My question was about meteorites, I wanted to know how big a meteorite would have to be to survive passage through the Earth’s atmosphere and how quickly its dust would travel around the world if such an event were to happen now. I’m writing a novel and this was research for me. Unfortunately they didn’t have the answer right there and then, but I’m still hoping to find out! At the end they mentioned that a free evening would be coming up and that we should all give it a go. 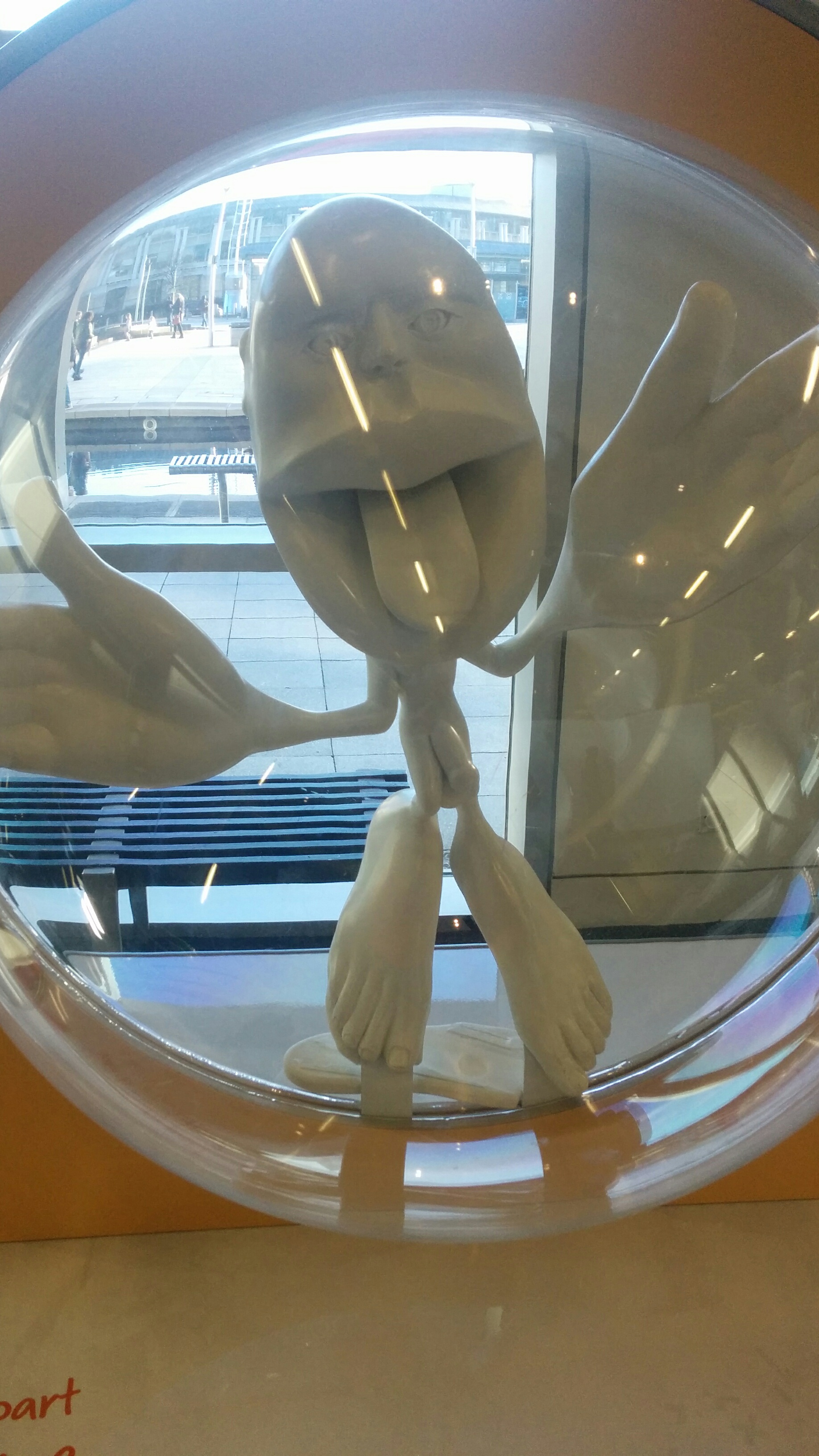 At-Bristol has many exhibits that are great at getting across information with very little reading involved. This piece shows the amount of nerve endings in different parts of the body through size.

I hadn’t visited At-Bristol since the closure of the Wildwalk many years previously, so I was eager to see how the science centre would have changed in that time. The last time I explored the huge open plan structure was through the eyes of a child; it was fun to experience science in a different way.

One of the biggest differences I noticed was the introduction of far more computers rather than just physical structures, leading to some exhibits that wouldn’t have previously been possible. The DNA exhibit was a prime example of this, being able to construct a DNA strand both on the computer and using the jigsaw pieces provided. 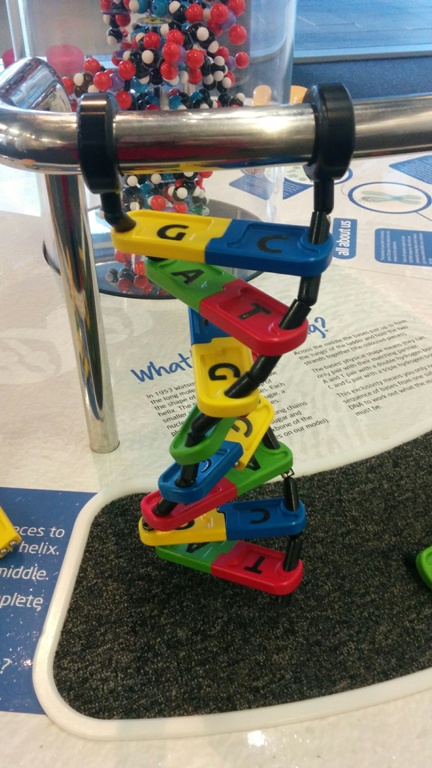 My attempt at creating a DNA Double Helix at the ‘Inside DNA’ Exhibit.

An exhibit that caught my eye was the ‘Your Amazing Brain’ display that contained several sections about different aspects of the brain. Personally, the part I found most fascinating consisted of brains at different stages of development. You could pick up and weigh the brains so you were able to physically see and feel the differences at various stages of life, from 26 weeks to 85 years old. It made me wonder what my own brain would be like as I fall between the two examples of 13 and 35. It also made me wonder if your brain physically changes size with the amount of information you learn. For example, would David Attenborough have a larger brain considering everything he’s learnt and taught compared with someone else his age? 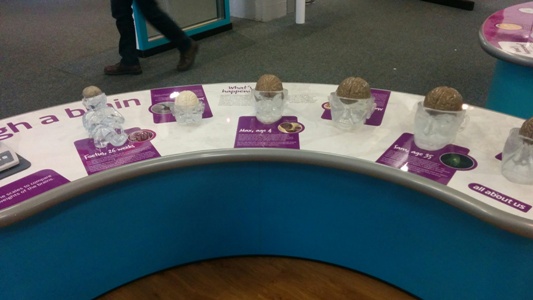 The ‘Your Amazing Brain’ exhibition took up a large portion of the ground floor and included a real human brain! This particular section showed the differences in brain development at different ages.

Similarly, I really enjoyed the curved wall dedicated to women’s bodies at different stages of pregnancy. As with the brain exhibit, this display had physical foetuses that you could remove and hold to judge size and weight. This had a real impact on me as a woman who has reached an age where lots of my friends and family have started having children. Obviously there is a lot of information around about pregnancy, you learn about it in school, but it has a different impact to see where the baby physically lays and to be able to feel how much extra weight pregnant women have to carry with them. 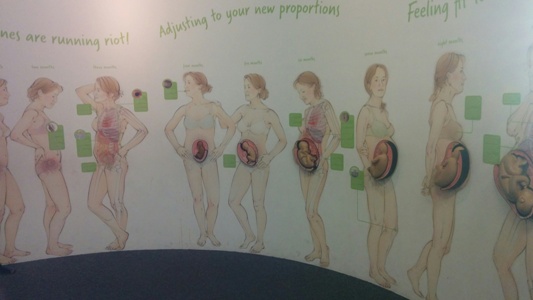 This wall detailed the biological changes women go through during pregnancy, including foetuses that could be removed to judge the changes in size and weight!

One of the most interesting exhibits was the ‘Animate It’ section on the second floor, which was partnered with Aardman Animations. You could create your own film using assets from Wallace and Gromit, and who doesn’t love Wallace and Gromit, especially if you’re from Bristol? 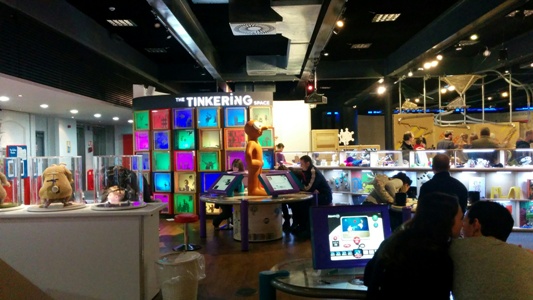 One of the most popular exhibits with adults and children alike, ‘Animate It’ is a great way of showing people the work that goes into the different aspects of animation.

My favourite exhibit had to be the ‘World of Food’ image gallery. It was fascinating and thought provoking to see how much food, or how little, people in different parts of the world have to live on every day, especially when I’ve been working on my own portion sizes lately. This is a great way to get people to think about the kind of food they eat and the kids can have fun with the various tasting booths scattered around. 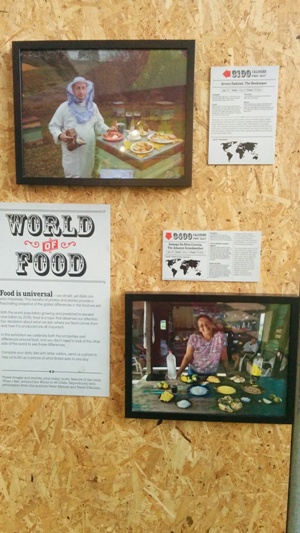 One of my favourite exhibits, the ‘World of Food’ gallery showed the diets of different people, in different professions, from all over the world.

Overall I had a fun afternoon; science is definitely easier to engage with through an interactive medium, especially for those with children. If you’re looking for an educational and hands on day out with the family or a friend then I would highly recommend At-Bristol.