The Planets 2018 – how do you control the planets during a live music event?

The event was produced by Sound UK, who toured the show this week around a series of planetaria in the UK; both of our shows were sell-out events, with some fantastic reviews from our visitors, and an absolute buzz here in We The Curious HQ.

The music was accompanied by live 3D visuals that were especially created by our super-talented Planetarium team – we thought it’d be interesting to see just what sort of work goes on behind the scenes for an event like this, so we caught up with Anna Henley, our Planetarium Officer to get a spot more info.

It’s also World Space Week, so a perfect time to indulge in a spot of planetary wallowing! 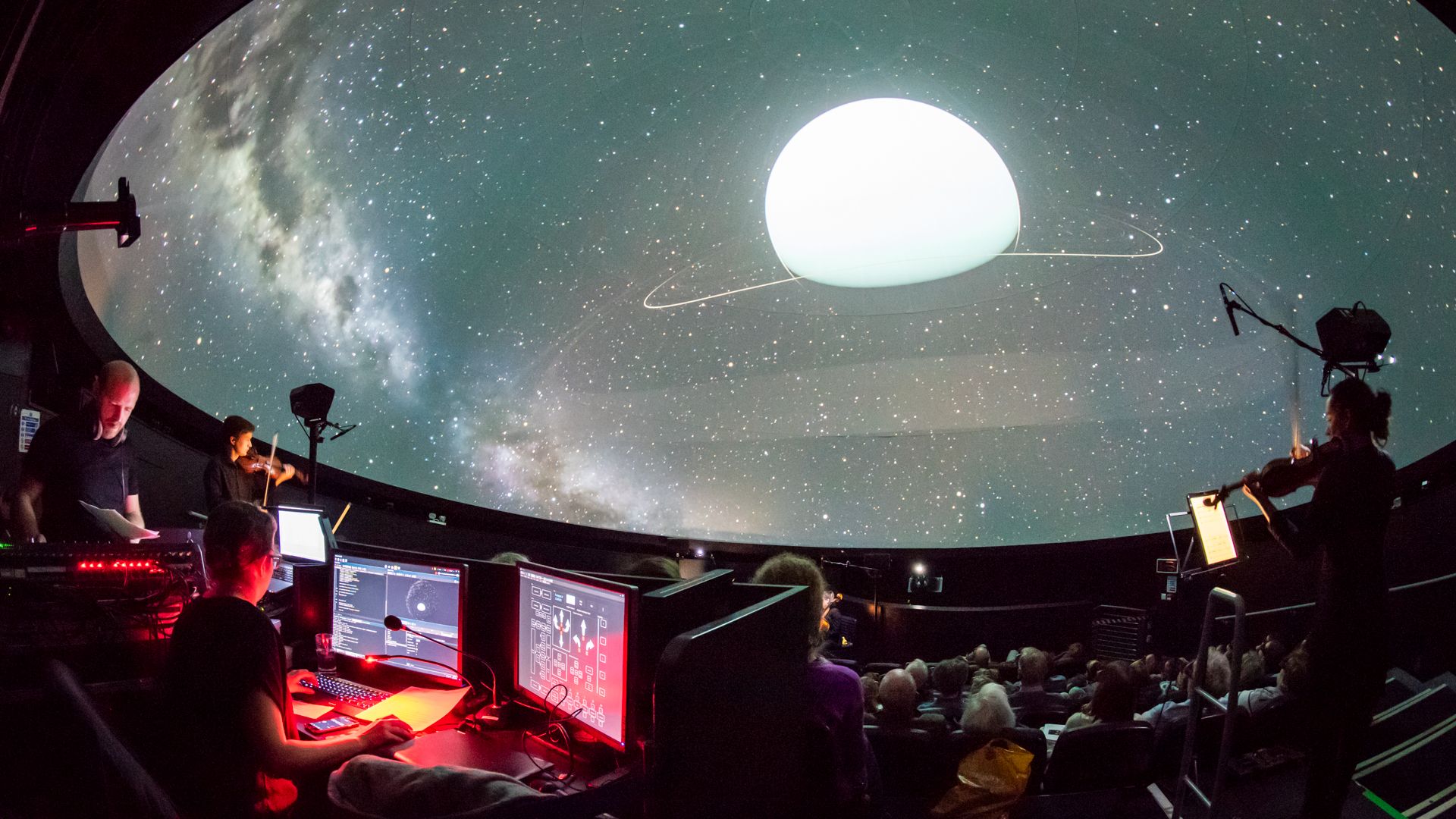 Anna, at the control desk of the Planetarium during The Planets 2018 event

Q. How much work went into the programming for The Planets 2018? What sort of work did you need to do?

I created a control panel for each planet with pre-programmed buttons that would allow me to manually control the visuals in real-time. Each control panel had options such as these:

I also created some manual controls to allow me to change orbital speeds/distances, explore planetary surfaces after landing, and speed up/slow down time amongst other things

Q. You were controlling the projections live during the events - what did that actually entail? How did you synch it with the musicians?

Using the control panels to fly around and show some cool stuff! I had a bit of information beforehand about what inspired each of the musicians, so I tried to choose the visuals that best matched their inspiration.

For example, with Jupiter – the inspiration was the four Galilean moons, each one of which was represented by a member of the quartet, so during this piece I focused on these four moons.

For the Mars piece, the inspiration was the sense of magnificence and closeness to Mars as well as its barren and cold surface. During this piece we flew to the Mars Express space probe and saw some of the images it has taken from orbit around Mars. We then landed above the Valles Marineris, a huge canyon on Mars, and spend some time exploring the surface.

I knew the length of each of the pieces of music, and had a timer so I knew when we were reaching the end. I was also listening carefully to the beat of the music and watching the two members of the quartet that were positioned at the back of the dome for the cues that they were giving each other, which helped me to time the visuals to the music.

Q.What were the challenges?

Fitting in all of the stuff I wanted to show within the length of the piece of music! I also didn’t get a chance to rehearse with the quartet before the live performances, so had to very heavily rely on my eyes and ears to make sure the visuals matched with the music.

Q.What was most enjoyable about the event?

Having such incredibly talented musicians playing live in our dome was absolutely amazing. I really wish I could have listened to one of the performances as an audience member, so I could have fully appreciated the pieces without having to concentrate so hard on what I was doing! 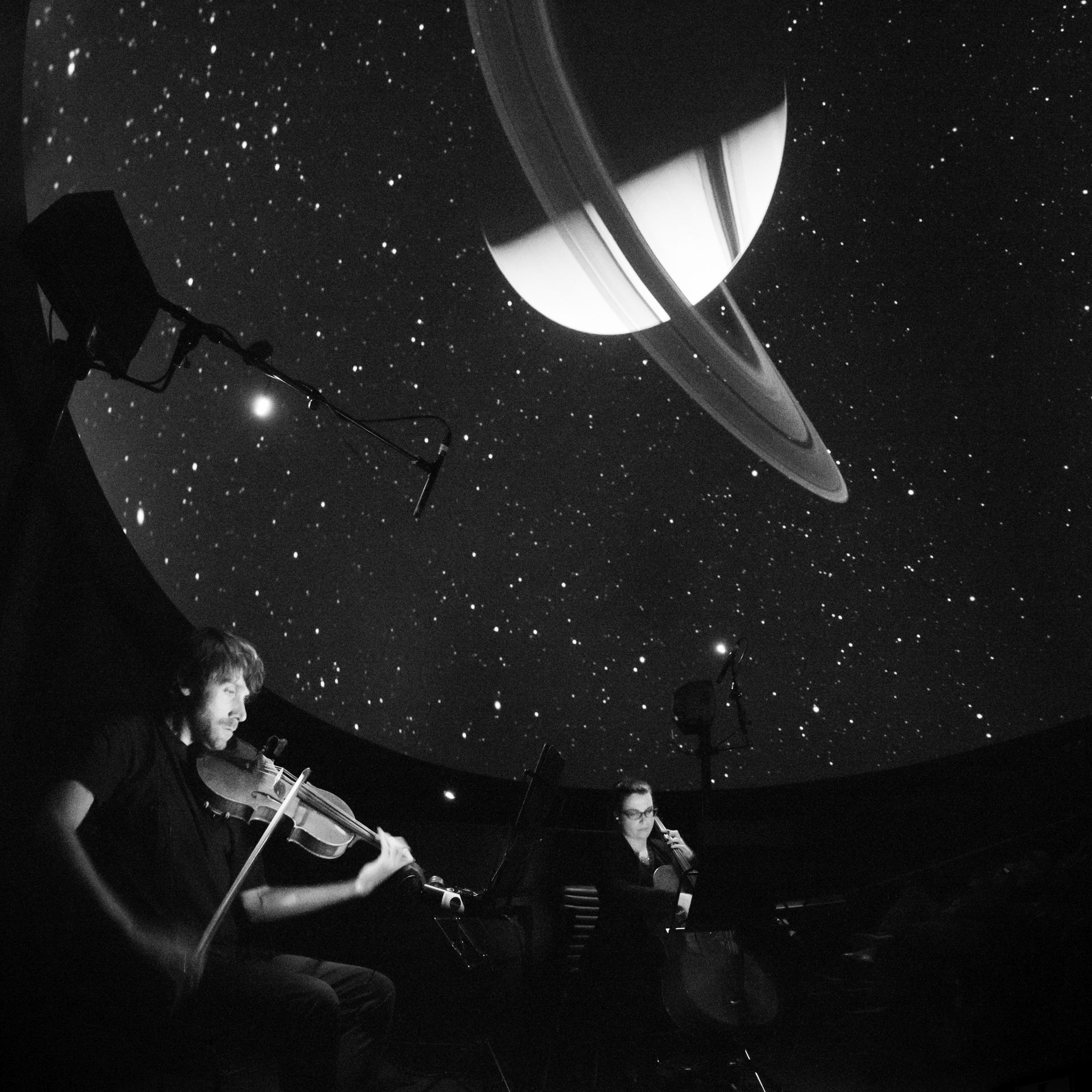 Members of the Ligeti Quartet playing in the Planetarium

As you can tell, we’re just a little bit proud of our teams here, and the expertise and skill that they bring to our programming of events and experiences.

We’re all about being collaborative, playful and progressive, and this sort of event ticks so many of our boxes for all of the right reasons – this inspiring, multidisciplinary event helps to join the dots between science and music, and we’re really proud to have been able to work with Sound UK on the event.

The Planets 2018 is a Live Music Sculpture event produced by Sound UK. Funded by Arts Council England National Lottery and RVW Trust. You can listen to the compositions from 11 October on http://www.sounduk.net/

Will humans ever become cyborgs?

Joel from our Live Science Team explores whether humans have become cybernetic organisms...

2015 marks the 25th anniversary of the Hubble Telescope, join Will as he looks at the history and findings of this amazing camera

Click here to see More from the Live Science blog