TOGETHER, LET’S REWILD OUR PLANET 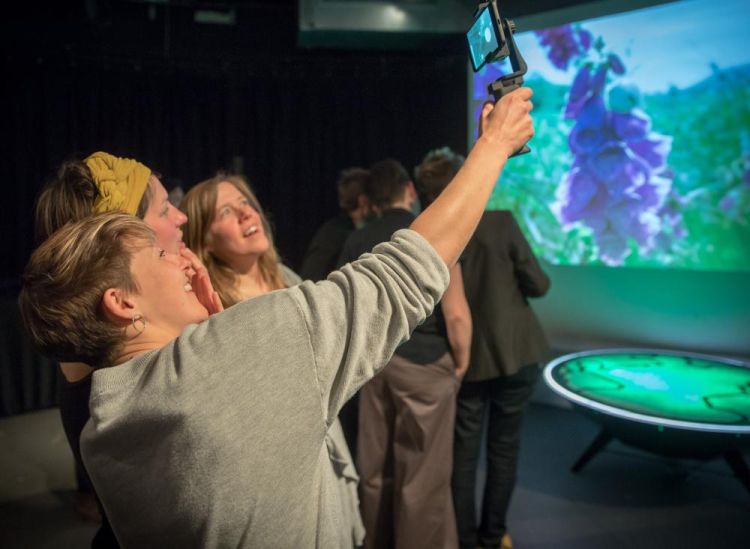 UNITED KINGDOM (12 April 2019) - From 12 April to 2 June 2019, We The Curious visitors will be able to explore the forests of Borneo or dive deep into the coastal seas of Southeast Asia with REWILD Our Planet, a social Augmented Reality (AR) experience jointly developed by WWF, Google, Netflix and PHORIA which will be showcased at We The Curious in Bristol. The sensorial experience connects people to nature and one another through immersive storytelling that blends cutting-edge AR technology with stunning 4K video footage from Our Planet, a new Netflix original documentary series voiced by world-renowned naturalist, Sir David Attenborough.

REWILD Our Planet is built around four natural habitats:

Combining spectacular projections with spatial soundscapes and AR, the experience unfolds through the lens of the Google Pixel 3, where groups of participants can work together to build natural landscapes in 3D. They will unlock global weather patterns and magical animal encounters, ending with a deeper understanding of shared solutions and a meaningful pledge to act and help bring nature back.

PROTECTING OUR PLANET IS A SHARED RESPONSIBILITY

Beyond showcasing the breathtaking diversity of our planet, the experience is also intended to drive important conservation conversations, highlighting the fragility of the planet and the negative impacts of humankind. It shows a path forward by pointing to solutions, so participants come away understanding not just the threats that face our planet, but also what must be done collectively, ensuring people and nature can thrive alongside each other.

WHERE STATE OF THE ART TECHNOLOGY AND QUALITY ENTERTAINMENT MEET

The experience uses footage from Our Planet, an eight-part series that showcases the planet's most precious species and fragile habitats, revealing amazing sights on Earth in ways they have never been seen using the latest in filming technology. Our Planet was created by Silverback Films, whose director was the creator of the award-winning series Planet Earth. The series is the result of an ambitious four-year collaboration with Netflix, Silverback Films and WWF. Our Planet combines stunning photography and technology with an unprecedented, look at the planet's most precious species and fragile habitats, at the critical time when we need global action to protect it. The ambitious project was filmed in 50 countries across all the continents of the world, with over 600 members of crew capturing over 3,500 filming days.

Footage from Our Planet was then integrated with Google’s ARCore technology - an Android Software Development Kit (SDK) that works with Java and Unity and Unreal, and includes Application Programming Interfaces (APIs) that bring AR to mobile devices without requiring any special hardware. PHORIA’s unique digital twin system which, once activated with Google’s ARCore, enables the 2D content to break free from the screen and seamlessly flow into the space around users.

A STEP IN IGNITING A GLOBAL CONVERSATION

REWILD Our Planet has been engineered in a modular way to pop up remotely anywhere in the world, and the AR activation has brought together a world-class line up of venues to bring its experiential conservation message to the world.

The experience is available at We The Curious in Bristol, ArtScience Museum at Marina Bay Sands in Singapore and Dolby SoHo in New York City, each venue bringing with it a unique, personalised flavour of the region.

Details of REWILD Our Planet in the United Kingdom

WORDS FROM SOME OF THE PARTNERS

Mark Wright, Director of Science, WWF-UK said: “Global wildlife populations have declined by 60 percent in the last 40 years due to unsustainable human activity, which impacts the very natural systems that our survival depends on. We need to not just stop, but reverse, the loss of nature. Bringing the challenges and solutions to life through REWILD Our Planet will help people around the world understand that they have a shared responsibility to act and protect nature. The powerful message conveyed dovetails with a unique opportunity to call for urgent action to protect the one place we call home, sending the clear message that it is no longer acceptable to continue to destroy our environment.”

Silverback Films
Jonnie Hughes, Supervising Producer on the Our Planet Project said: “Bristol has been at the heart of natural history programme making since the beginning - as the production base for the original wildlife radio shows, then the BBC's Natural History Unit, to its current position as the hub of a global wildlife production industry - so it's fitting that this new wildlife media experience should premiere here in the UK.  Being able to take the footage shot for the Netflix series and re-imagine it as a presentation that you can interact with is a fantastic use of the resources, and a great way to engage people further with the critical story of the loss of our planet's wild places.”

Tania Dorrity, Head of Programming at We The Curious said: “One of the highlights of a new season exploring climate change at We The Curious, REWILD Our Planet combines art and cutting-edge technology to create an immersive and interactive exhibit showing how climate change impacts all living creatures.  It transports visitors to some of the world’s most jaw-dropping landscapes and enables them to envision a wilder future for our world.  Using the latest Augmented Reality technology REWILD Our Planet reveals how our actions impact the natural world and encourages us all to play an active role in the conservation. We’re also really excited to be working in partnership with WWF – another charity whose aims to create a more sustainable future align very closely with our own.”

PHORIA
Trent Clews-de Castella, CEO of PHORIA said: “REWILD Our Planet showcases how AR has the power to build bridges between people and the places they love. This evocative experience emphasises the connection between human beings and our environment. It generates a sense of presence and interactivity for every individual user. Building this exhibition with Netflix and Google and combining it with compassion-driven narrative from WWF demonstrates how emerging XR technologies will transform the social impact sector for good.”

About Our Planet
Our Planet is a Netflix original documentary series, premiering globally on 5th April 2019. Sir David Attenborough voices the series in English-language territories. The ground-breaking, eight-part series has been created in partnership with Silverback Films, and WWF, and will showcase the planet's most precious species and fragile habitats, revealing amazing sights on Earth in ways they’ve never been seen using the latest in 4k camera technology. The partnership with WWF enables the series to go beyond showcasing the wonders of our planet to reveal what we must do now to ensure people and nature can thrive, through a wealth of online resources and educational programmes for schools available at www.ourplanet.com and interactive experiences including Rewild Our Planet.

WWF is one of the world’s largest and most respected independent conservation organizations, with over 5 million supporters and a global network active in over 100 countries. WWF’s mission is to stop the degradation of the earth’s natural environment and to build a future in which humans live in harmony with nature. WWF-Singapore's campaigns centre around sustainable consumption, raising awareness and prompting action on issues such as deforestation, haze pollution, seafood sustainability and the illegal wildlife trade. wwf.sg

Netflix is the world's leading internet entertainment service with 139 million paid memberships in over 190 countries enjoying TV series, documentaries and feature films across a wide variety of genres and languages. Members can watch as much as they want, anytime, anywhere, on any internet-connected screen. Members can play, pause and resume watching, all without commercials or commitments.

PHORIA is a world leading immersive tech studio that specialises in cutting-edge Virtual, Augmented and Mixed Reality (VR/AR/MR/XR) technology. With a globally recognised team of developers, creatives and partners, PHORIA are on a mission to transform human experiences and augment intelligent environments. They create powerful user interactions and social experiences, all with the goal to generate a positive impact on the world.

About We The Curious
We The Curious is an educational charity that removes boundaries around science - connecting art, people and ideas in a united culture of curiosity. It’s venue on Bristol’s harbourside offers all sorts of different experiences, including over 250 interactive exhibits, live science shows, collaborative experiments and the UK’s only 3D planetarium. We The Curious is all about empowering everyone to ask questions, being playful and testing things out.

ArtScience Museum
The ArtScience Museum has been the home of another nature-related AR experience, Into the Wild, since 2017 - another joint partnership between WWF, the ArtScience Museum and Google. The museum’s Inspiration Gallery, where the experience is held, is the perfect venue due to the massive curved wall which allows for the stunning projections and spatial soundscapes.

For further information, to arrange a press visit or to request images, please contact jen.forster@wethecurious.org or call 0117 9157 152