What springs into your mind when you hear someone say the words “black hole”?

Don’t think about it – just say the first thing that comes into your brain.

How about “mysterious?” “Dangerous?” “Yawning abyss of doom!”

Now think of the last film or TV show you saw that featured a black hole. Chances are the heroes were trying to escape from its remorseless grasp. Or maybe the black hole was distorting time in some weird and chaotic way?

An all-consuming devil or a physics defying trickster god! It’s safe to say that black holes have a bit of an image problem.

But this hasn’t stopped us from being fascinated with them.

We the Curious recently asked the Year 6 pupils of Hareclive E-Act Academy to submit questions about space. It probably won’t surprise you to hear that many of their questions were about black holes.

“How do I survive a black hole?”

“What is on the other side of a black hole?”

The reputation of black holes as objects of mystery and dread endures! But are black holes really as scary as they seem, or are they just misunderstood? 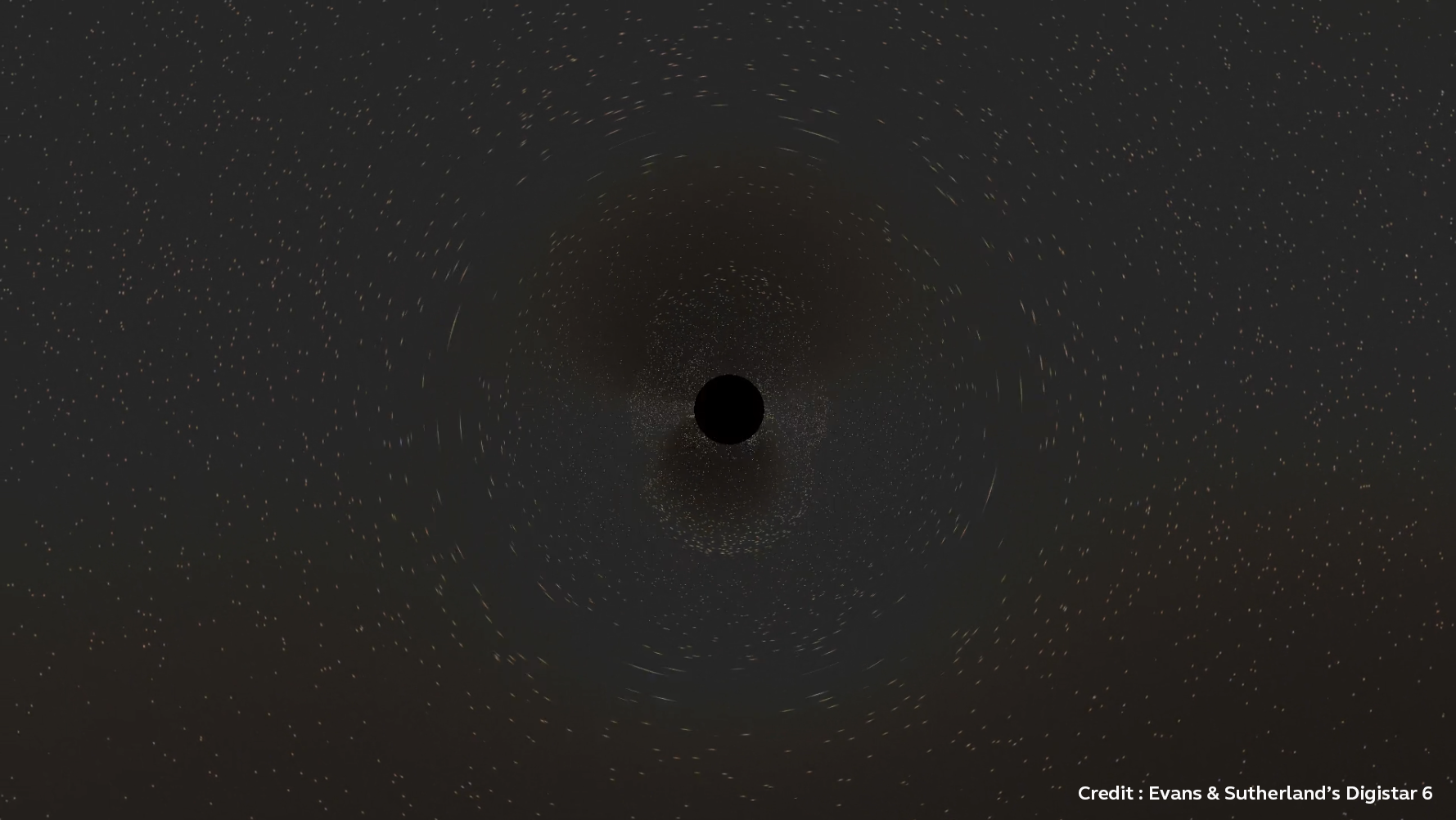 What is a black hole?

Imagine you have to tidy your house in a rush. You pack everything you can find out of the way into a small cupboard until you can’t possibly fit anything else in, and the cupboard is bulging at the seams.

But what if you could keep packing stuff into that cupboard? Your TV, your sofa, the contents of your kitchen, your entire house. That cupboard would start to get very dense and very heavy.

Now imagine you could pack something as huge as a star into that cupboard. And imagine that cupboard was infinitely small – smaller than the smallest microscopic thing that’s ever existed.

That’s a black hole - a huge amount of matter packed into a very small area.

All this stuff packed together in one place creates a field of gravity so strong that nothing, not even light, can escape. As a result, a dark sphere forms around all that densely packed matter. We call this the event horizon!

Where do black holes come from?

Most black holes are formed from the remains of dead stars.

Stars are massive – they’re made from a huge amount of stuff. Stars that are made from the most stuff are called high mass stars.

After shining for millions – or even billions – of years, stars will eventually run out of fuel. When this happens to high mass stars they explode! We call this explosion a supernova.

When stars go supernova the outer part of the star is blasted out into space. The collapsed core of the star is left behind – lots and lots of stuff occupying a relatively small space.

Many of these collapsed cores become neutron stars. These are very dense - one sugar cube of neutron star material would weigh as much as a mountain!

But sometimes, when a very, very high mass star goes supernova, something even more incredible happens. We’re left with a collapsed core that’s made of so much stuff packed into such a very small space that a black hole is formed!

It’s easy to see why black holes have such a fearsome reputation. They’re not exactly the ideal destination for your holidays.

If you were to approach a black hole you may notice a disk of glowing material around it. Gas and other material can get pulled into orbit around a black hole. This produces friction, which creates light and heat. We call this an accretion disk. 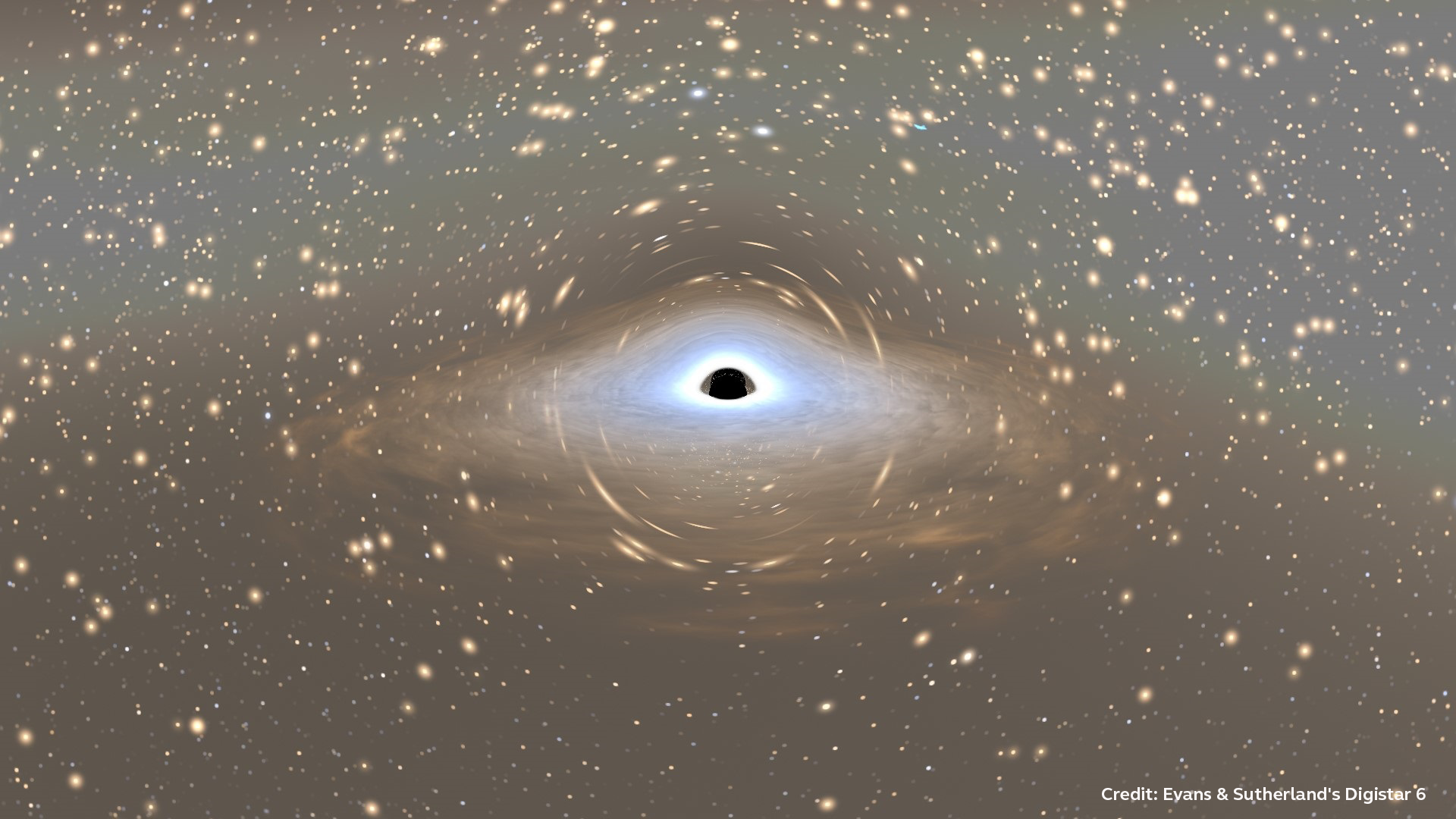 The temperature of an accretion disk can reach millions of degrees Celsius. As a result, it gives off lots of high-energy X-rays. This helps scientists to detect black holes, but it also means that approaching a black hole could be hazardous to your health!

If you survived the temperature and radiation from the accretion disk, things would get even weirder. Just outside the event horizon of some black holes is an area called the “photon sphere”.

This all sounds pretty scary, but don’t panic! 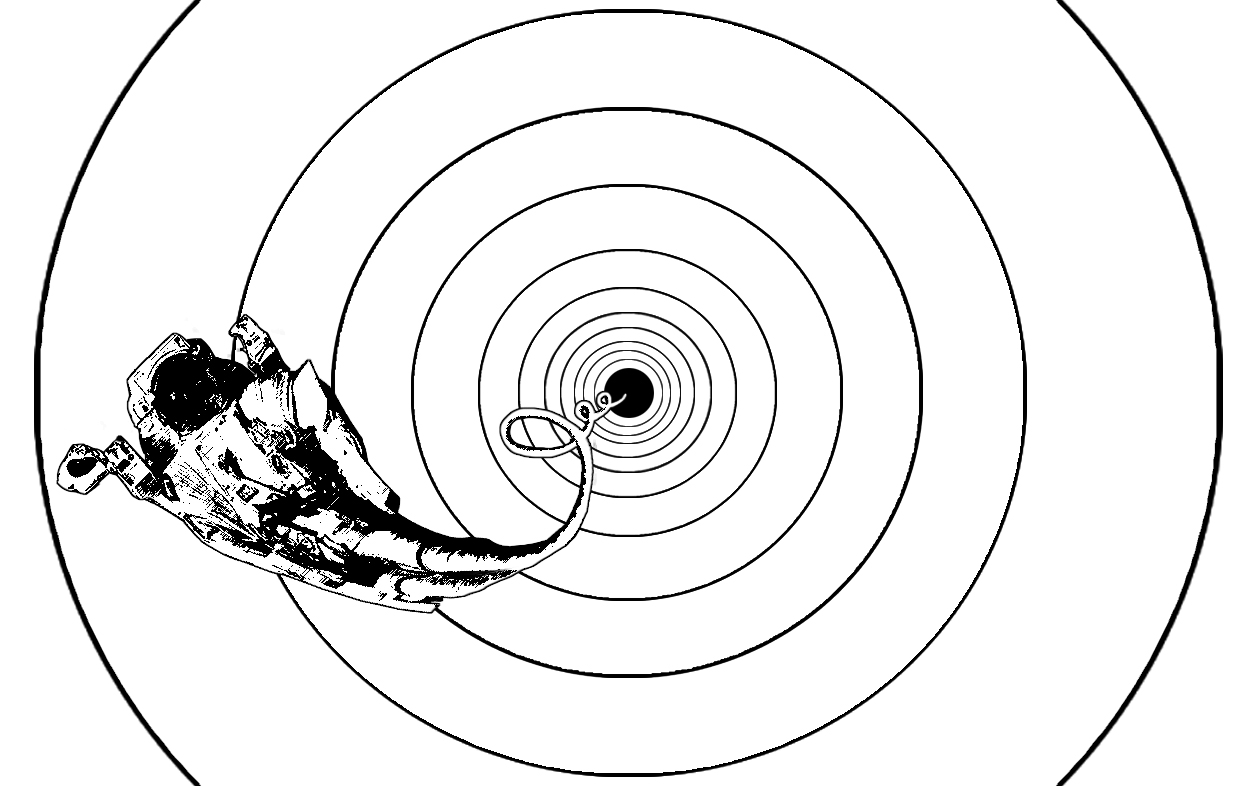 Am I going to get sucked into a black hole?

We are in absolutely no danger from black holes. They’re a bit like tigers – it’s a bad idea to stick your head in their mouth, but you’re probably not going to meet one on your way to the shops.

Unlike tigers, black holes don’t hunt. They’re not roaming around space eating stars and planets. There is no black hole near our Solar System, so there is no chance of Earth ever getting sucked into a black hole.

In fact, the closest black hole to Earth is 1560 light years away from us. It would take us around 30 million years to travel there in a rocket!

But what if our Sun turned into a black hole?

The good news is our Sun is not a big enough star for that to happen.

Even if a black hole took the place of our Sun, Earth wouldn’t get sucked in. If the black hole was the same mass as the Sun, then it would have the same gravity as the Sun. Earth and all the other planets of our Solar System would stay in the same orbit.

We’d be walking around in the dark and we’d be very cold, but we wouldn’t be squished into spaghetti!

Although we may not be in any immediate danger from them, it seems as if we’re right to be at least a bit wary of black holes. But, if we think of black holes only as terrifying orbs of death, we’re missing out on all the truly exciting things about them.

What are supermassive black holes?

Scientists believe that at the centre of most galaxies in the Universe there’s a supermassive black hole.

Black holes that form from the remains of high mass stars are usually about three to ten times the mass of our Sun. But supermassive black holes can be millions, or even billions times more massive than our Sun.

In 2019 an image of the silhouette of the supermassive black hole at the centre of a galaxy called Messier 87 was revealed. This was the first picture of a black hole ever captured, and it was done with the Event Horizon Telescope. The EHT is actually several radio telescopes placed around the world that work together to make one virtual Earth-sized telescope. 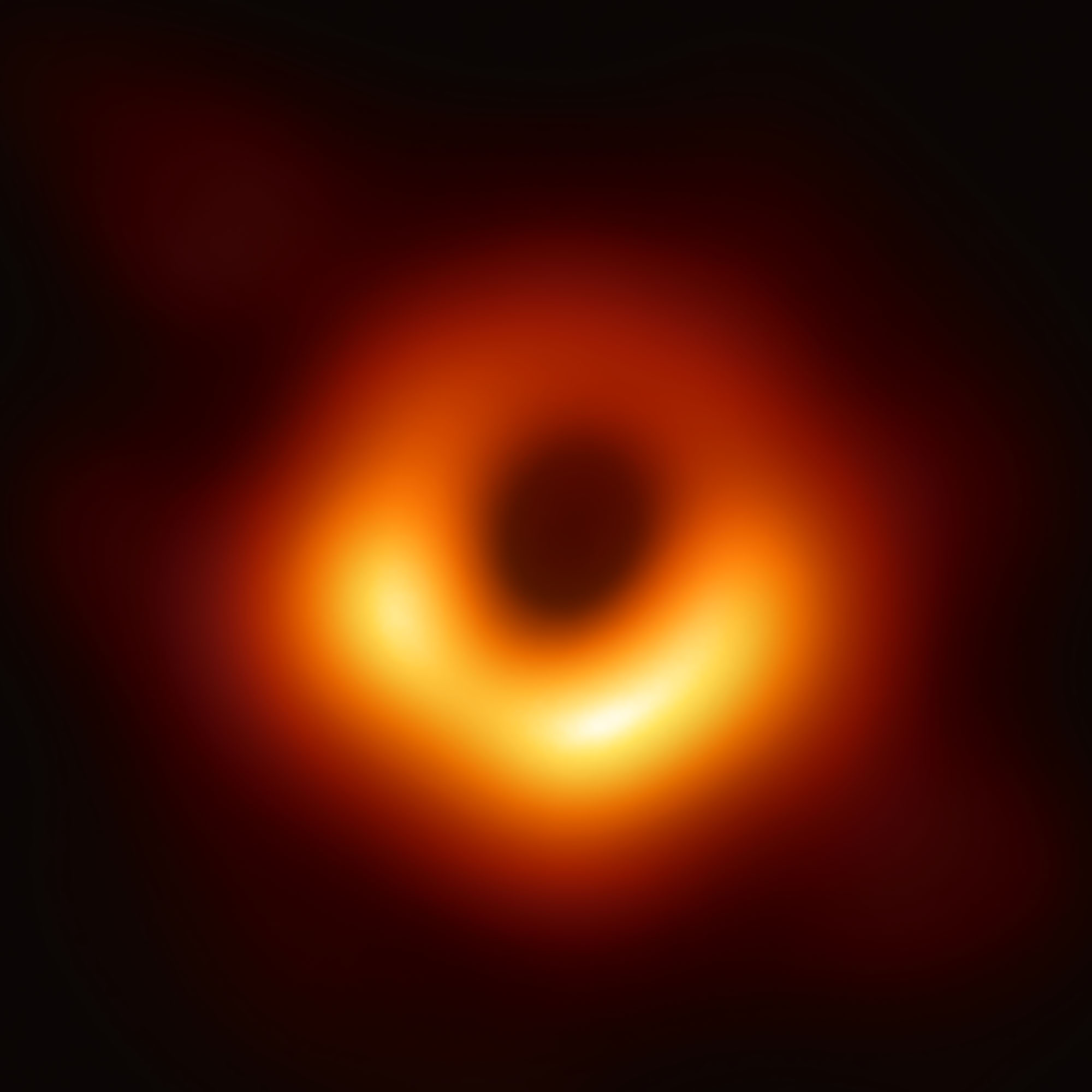 There is also a supermassive black hole at the centre of our galaxy, the Milky Way. It’s called Sagittarius A* and in 2022 it was revealed that the EHT had succeeded in capturing its image. Sagittarius A* is a lot smaller than Messier 87’s black hole and creating this picture has been compared to trying to photograph a doughnut on the Moon!

Rather than a devil or a trickster then, black holes could be the nurturing childhood pals of their galaxies – growing up alongside them and maybe even helping them to form stars. 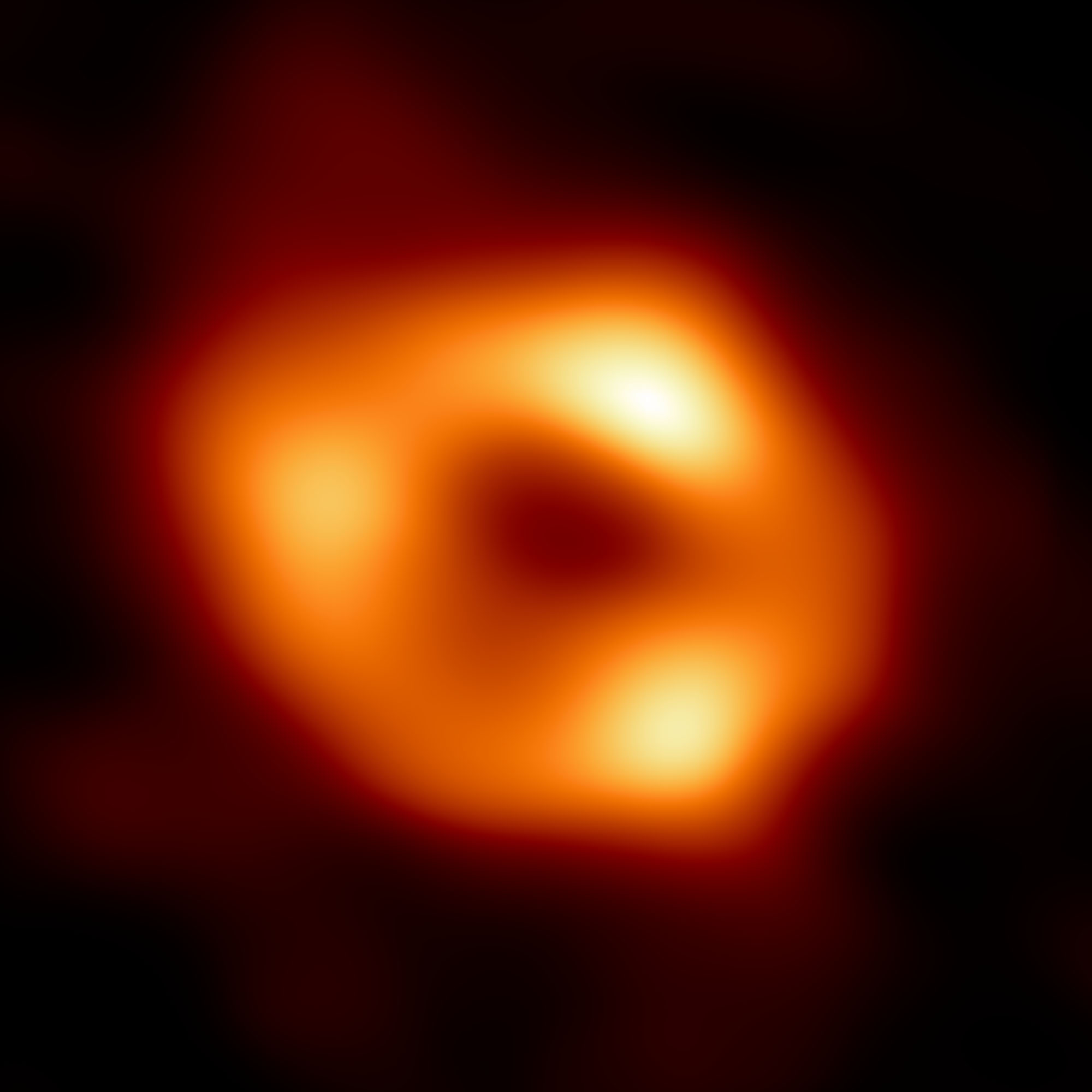 What’s on the other side of black holes?

Black holes may also hold the secret of time travel!

Imagine jabbing your finger through a pancake. Your finger could reach through the hole to another part of the pancake, or to another pancake on your plate.

Now imagine the Universe is a flat surface, just like that pancake!

Massive objects like a star create a “dip” in the surface of the Universe. We feel the effects of this “dip” as gravity.

As we’ve discussed, black holes aren’t just massive, they’re compact - lots of stuff is squashed together in one place. Massive and compact objects like black holes could create not just a “dip” in the Universe, but a hole.

Anything that went through the hole could travel to another part of the Universe, another point in history, or even a different Universe altogether! 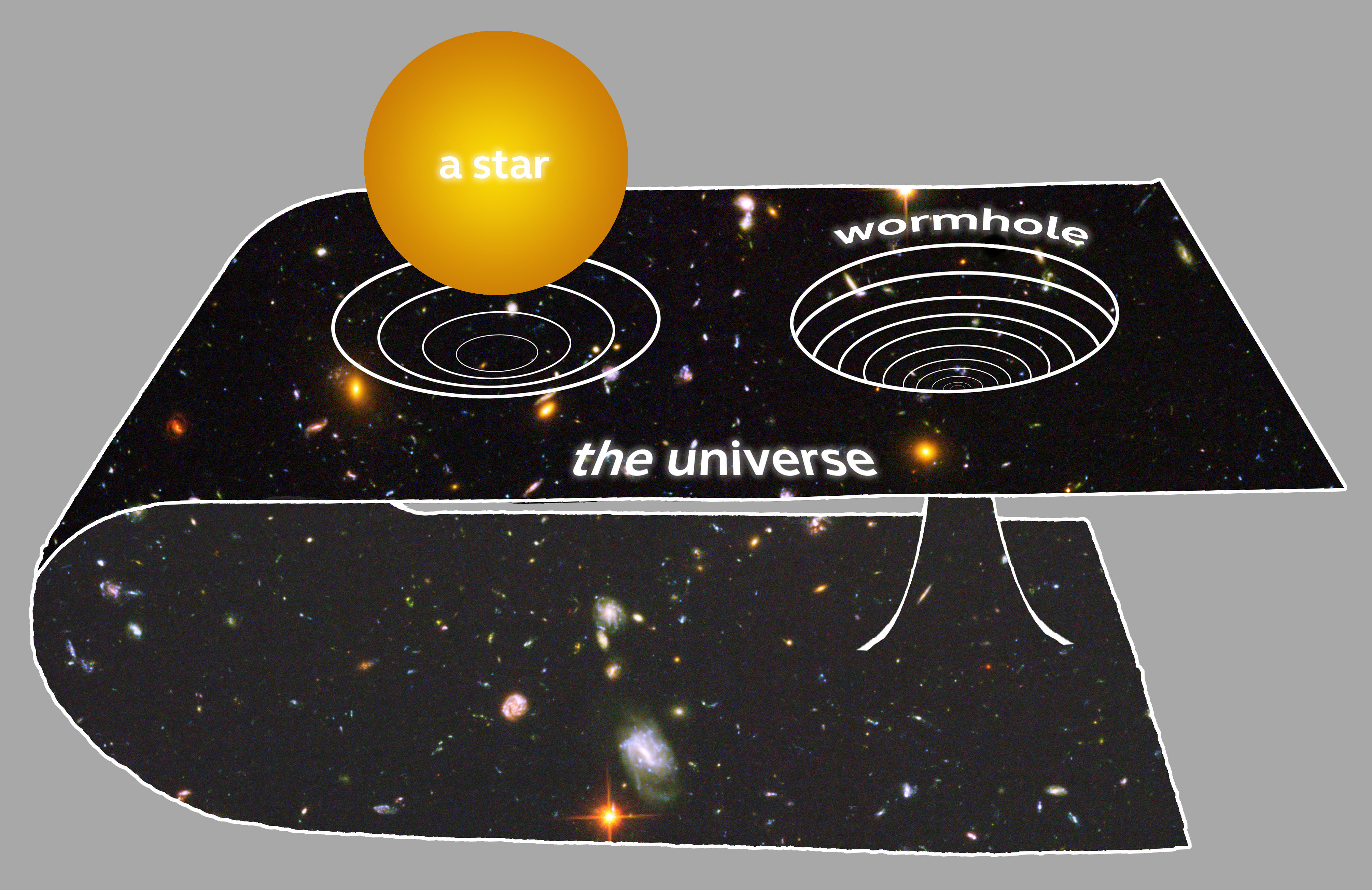 These theoretical “wormholes” are called Einstein-Rosen Bridges. They’re named after Albert Einstein and Nathan Rosen, two scientists who proposed their existence in 1935.

It’s incredibly exciting to imagine black holes taking us to distant planets, future times, or parallel Universes. But no Einstein-Rosen Bridges have been discovered so far. Even if we knew for sure that they existed, that doesn’t mean that every black hole would create one.

Einstein-Rosen Bridges would probably be microscopic in size. They’d also be unstable. You’d need something called “exotic matter” to keep them open, and we don’t know if exotic matter actually exists.

We’re not likely to be booking a trip to the Andromeda Galaxy or the 31st Century any time soon. But just imagine you could go any place and any time. Where would you go?

Hero or villain? Friend or enemy? It seems that black holes have got rather a bad rap.

There’s a lot more to them than death and spaghetti. They’re objects of wonder that potentially help galaxies to grow and may one day provide us with the key to exploring space and time.

So, ask yourself once again - what springs into your mind when you hear someone say the words “black hole”?

A massive thanks to the Year 6 pupils at Hareclive E-Act Academy whose ideas, questions and prototypes have inspired this article as part of our Hareclive in Space project.

This article was inspired by the question 'How dangerous are black holes' as asked by the Hareclive pupils.