Read | Stargazing - where do I start?

On a dark, clear night it’s possible to see thousands of stars glittering in the sky. Exploring the night sky can be an exciting experience. It’s an amazing feeling, clinging to the side of Planet Earth and staring out into the rest of the Universe!

But for anyone new to stargazing, the night sky can be a beautiful but intimidating sight. There are so many stars up there — where do I start? Where do I look? How on Earth can anyone possibly see pictures among all those dots?

Long before I started working as the Assistant Planetarium Producer at We the Curious I used to ask myself these same questions. But the sky isn’t quite as big and baffling as it seems.

In this article I’ll show you the best place to start stargazing. There are also two videos below, originally live streamed on Facebook, where I use the free Planetarium software, Stellarium (download it here!) to point beginner stargazers in the right direction.

Let’s find our first pattern in the stars!

Constellations are patterns of stars that have been officially named by the International Astronomical Union. They’re used to help people find their way around the night time sky. There are 88 constellations that cover the entire sky of both sides of the world.

Many of these official constellations were first named long ago by the ancient Greeks. Some of them, like Orion the Hunter, or Cassiopeia the vain queen, are quite famous. Some of them are less famous, like Coma Berenices — a constellation that’s meant to be in the shape of long flowing hair!

However, the best pattern to find when beginning your stargazing journey is not a constellation — it’s an asterism. An asterism is a pattern in the stars that lots of people know about but isn’t an official constellation.

The asterism we’re looking for is made of seven stars. Our asterism has lots of names — in the United States of America they call it the Big Dipper, while in the United Kingdom and Ireland its usually called the Plough. In Wales (where I come from) it’s usually known as “y Sosban”, or the Saucepan.

The Saucepan is fairly easy to spot as its big, bright, and visible all year ‘round, and this makes it the best place to start stargazing. It can often be easier to spot from a brightly lit city or town, as the light pollution drowns out the more distant, less bright stars, making this asterism really stand out. 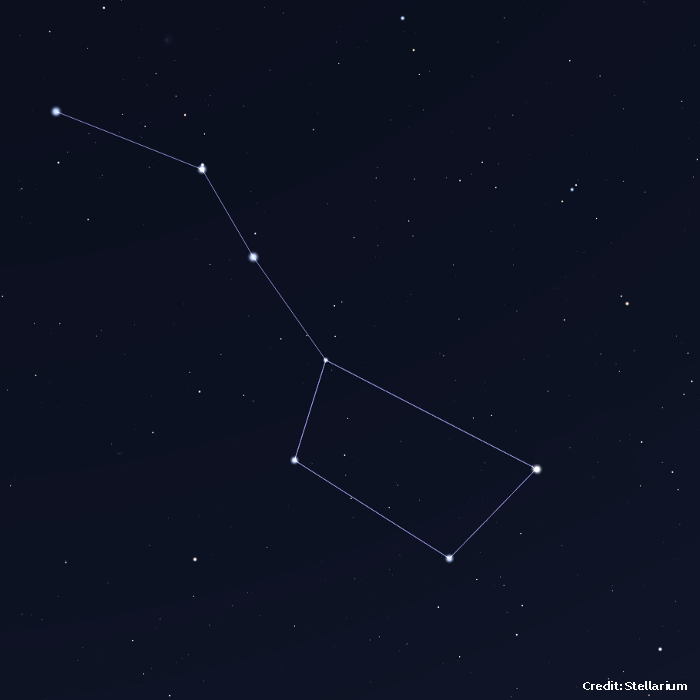 There’s an African American folk song about the Saucepan called “Follow the Drinking Gourd”. The song was first published in 1928 but some people say the song dates back to the 19th Century.

The legend goes that the song “Follow the Drinking Gourd” was used to secretly advise people who escaped slavery in the southern states to follow the Saucepan — which they called the Drinking Gourd — towards the north, and towards freedom.

Unfortunately, this story is unlikely to be true. Historians think that if a lot of people had been using the same route to escape slavery, then it wouldn’t have been long before that route was shut down.

Also, most of the people from the south who escaped slavery headed for big Southern cities, or Mexico, and the Caribbean, rather than the north. Still, it’s a good story, even if it probably isn’t true.

The reason the Saucepan is so useful to anyone trying to find their way north is that it always appears very close to a star called Polaris. Once you have found the Saucepan you can find Polaris by imagining a straight line coming from the two stars at the “front” of the pan and making five short “hops” along it.

By coincidence and good luck Polaris is almost directly above the Earth’s North Pole. This means that Polaris always seems to stay in the same position, and the closest bit of land to Polaris is always in the North.

All the other stars seem to rotate around Polaris. For this reason, Polaris is known as the North Star and it’s been used since ancient times by explorers to find their way. 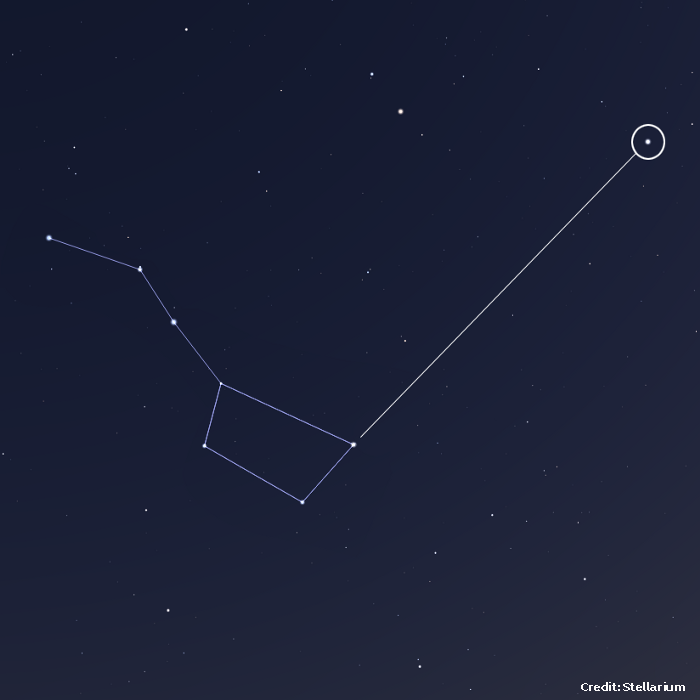 The Saucepan may not be a proper constellation but it’s part of much bigger pattern that is a constellation. The saucepan is made from the very brightest stars in the constellation of Ursa Major, which is Latin for “Great Bear”. Polaris is the tip of the tail of another constellation — Ursa Minor, the little bear.

According to ancient Greek mythology, Ursa Major was a wood nymph named Callisto, who fell in love with Zeus, king of the Greek gods. Zeus had a son with Callisto, named Arcas. This angered Hera, Zeus’ wife and so she turned Callisto into a bear.

Callisto spent the next few years in the form of a bear. Meanwhile, Arcas grew up and became a hunter. One day, while out hunting in the forest, he spotted a bear and took aim with his spear. That bear was his mother!

To save Callisto, Zeus turned Arcas into a bear so that he might recognise his mother. He then transported them both to the heavens where they became Ursa Major and Ursa Minor.

Ursa Major and Ursa Minor appear so close to Polaris that they never dip below the horizon and are always visible in the night sky (at least for people on the northern half of the world). We call constellations like this circumpolar constellations. According to Greek mythology, this is because Hera pleaded with Poseidon, the god of the sea, to never allow the bears to bathe in his waters. 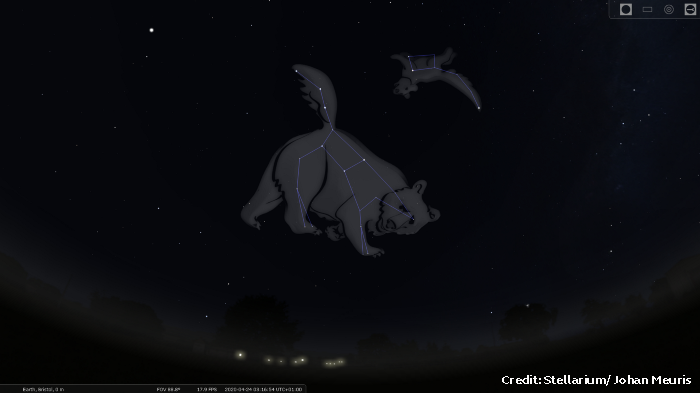 Muin and the Seven Hunters

The Mi’kmaq — a First Nations people who come from parts of Canada and North America — also saw a bear when they looked at Ursa Major, and they have their own story about it. The Mi’kmaq teach each other by passing their stories down from generation to generation. Other First Nation groups have their own versions of this story, but this is the story told by the Mi’kmaq. It was passed on to me by the Curator of Mi’kmaq Cultural Heritage and Research at the Nova Scotia Museum.

Every Spring, Muin the Bear comes out of her den and goes up into the sky. Muin is chased throughout the year by three other stars (the “tail” or “saucepan handle”). These are the first of seven birds.

Muin is always first spotted by Chickadee, who decides Muin would make a great feast after the long Winter months. Chickadee is very small and asks some of his friends for help. Robin takes the lead and is followed by Chickadee and Grey Jay. They are then joined by four larger birds — Pigeon, Blue Jay, Barred Owl, and Saw-whet Owl.

The chase takes months. The bear and the birds all travel across the sky around Polaris. The Mi’kmaq name for Polaris is Tatapn.

As Autumn approaches the four larger birds lose track of the hunt and begin to disappear over the horizon, leaving only the three smaller birds.

In October Robin catches up with Muin and shoots her with an arrow. Muin becomes a skeleton but continues travelling through the sky.

Robin is covered in Muin’s blood! He flies to the nearest maple tree and shakes himself to get clean. The blood lands onto the leaves of the maple trees, turning them red each Autumn. Robin is unable to get the blood off his breast and Chickadee tells him “that will be there as long as your name is Robin!”.

Grey Jay joins Robin and Chickadee after the hard work of preparing for the feast is done. He is so pleased to avoid the work that he never hunts again, preferring to follow other hunters for his food instead. This is how he got his Mi’kmaq name — ‘He-who-comes-in-at-the-last-moment’. But Chickadee and Robin are kind and still allow Grey Jay to share the feast.

As Autumn turns into Winter and then into Spring, it all begins again. Muin’s spirit enters a new she-bear and she is once again hunted by the birds throughout the year. 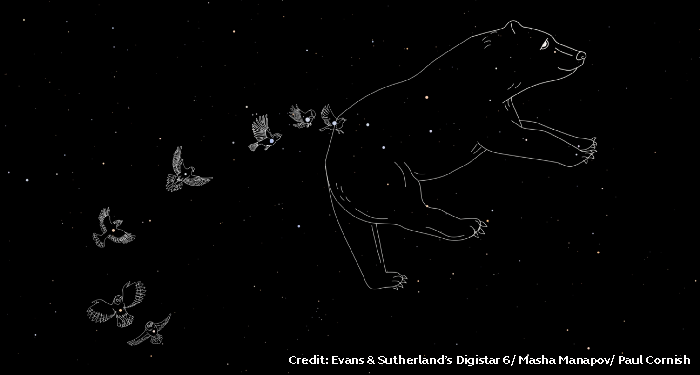 Why did the ancient Greeks and the Mi’kmaq both see a bear?

Both the Mi’kmaq story of Muin and the ancient Greek story of Callisto might have developed from stories of a cosmic bear hunt that were told many thousands of years ago!

15,000 years ago, America and Russia were connected by a huge land bridge. People were able to move back and forth between the two massive continents without having to cross the sea. Gradually over time this land bridge disappeared underwater as the sea levels got higher.

Groups of people who had once been able to meet and swap stories were now separated, but their stories remained. In the area that became known as Greece the old stories of a cosmic bear hunt gradually became the story of Callisto. In North America and Canada these stories became the story of Muin!

While the Saucepan, Ursa Major, and the North Star are the best place to start looking at the night sky, there’s still lots more to see. Look out for more articles and videos from We the Curious to guide you through the sky. Good luck on your stargazing journey and have fun!